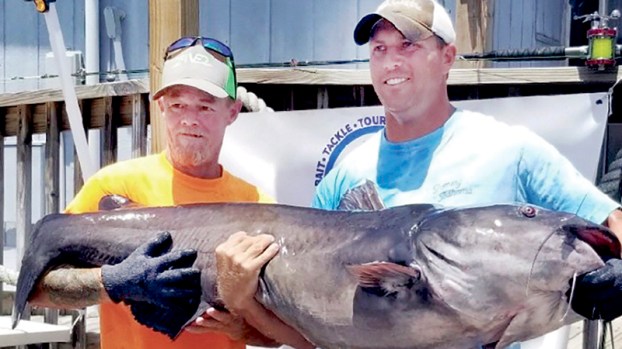 Gates County angler Danny Taylor (left) poses with John Kellett, owner of Tunis Bait & Tackle, as they display Taylor’s 82.2-pound blue catfish he reeled in during a July 15 tournament on the Chowan River. This blue catfish is believed to be the largest ever landed on a rod and reel in the Chowan. Contributed Photo

The Harrellsville native and current resident of Gates, employed by Ashton Lewis Lumber, now has the proof to back up his assumption.

Fishing this past Sunday (July 15) in the monthly Chowan Catfish Challenge based out of Tunis Landing, Taylor landed an 82.2 pounder, which of course was the winning catch at the event.

The catfish measured 56.5 inches in length and had a 34-inch girth.

According to John Kellet, the event’s tournament director and owner of Tunis Bait & Tackle, he believes Taylor’s catch stands as the biggest recorded catfish ever landed by rod and reel on the Chowan River.

“Blue catfish didn’t start moving into the Chowan River until about 23 years ago,” said Steve Grzanka, who manages the Northeastern NC Anglers Club and was on hand Sunday to capture Taylor’s moment with a photo. “I’ve seen bigger ones, but never got them to the boat …. yet. That fish during the winter weighs 100 pounds if I had to guess.”

Using a Big Cat Fever rod and reel with cut bream and white perch as bait, Taylor said he hooked the fish shortly after the tournament’s 7 a.m. blast-off.

“It was the first bite I had that day,” Taylor said.

As things turned out it was his only bite of the day as he headed back to the dock with the monster cat safely onboard. It earned him the first place prize money ($200) awarded by the tournament.

“I was scared that I wouldn’t be able to get her in the boat,” said Taylor, who was fishing without a partner on Sunday. “When I finally got her alongside the boat and was ready to net her, she was so big that she broke my net….she was huge.”

After catching his breath for a moment, Taylor used a little ingenuity to get the fish in his boat.

“I reached in the water and grabbed her with my left hand while still holding the rod tight in my right hand,” he recalled. “I then let the rod go and grabbed her with both hands and pulled with every muscle I had. We both fell in the bottom of the boat. I was covered in slim, but I didn’t care.”

At that point, Taylor said he realized another fact…..the live well on his boat wasn’t large enough to accommodate the big catfish.

“That’s when I decided to head back to the dock. I called John on his cell to let him know what I had and they filled up the biggest holding tank they had,” Taylor noted. “They were all in awe when I got back and they saw the fish, and I was still in awe of what I had.”

He said the biggest blue catfish he previously caught in the Chowan River was a 37-pounder approximately eight or nine years ago. Taylor added that he regularly catches catfish there in the 20-to-30 pound range.

“There are some big cats in the Chowan; I’ve hooked a few in the past but couldn’t land them. They don’t count until you get ‘em in the boat,” he said.

Taylor noted the 82-pounder he hooked on Sunday morning was big when he felt the initial tug on his fishing line.

“It ran with 75 yards of line from the outset; I knew right then it was a big one,” he shared, adding that the ensuing battle took about 20 minutes.

After the weigh-in, Taylor released his prize-winning and record-holding catch back into the waters of the Chowan River.

“It was 100 percent alive when we put her back in the water. We believe in CPR – catch, picture (photo) and release. There’s no need to kill a trophy fish,” he stressed.

So, what’s next for the 47-year-old father of three adult children. Will this catch be self-satisfying to the point where he’ll lay down his rod and reel and look for another hobby?

“Nope,” he quickly answered. “I’ve been fishing all my life since I was a child growing up in Harrellsville. I’m looking for one bigger. I want to land one that is a hundred-pounder or more; I just love to fish for catfish.”

Perhaps he’ll go in search of matching or exceeding the state record for a blue catfish. According to the North Carolina Wildlife Commission’s website, that honor belongs to 15-year-old Landon Evans of Benson. Evans landed a 117-pound, 8-ounce whopper on June 11, 2016 during a fishing outing on Lake Gaston. His record catch measured 55 inches in length and 40½ inches in girth.

The N.C. Wildlife Resources Commission confirmed the new state record after the fish was weighed on certified scales at Ace Hardware in Littleton and examined and identified by District 3 Assistant Fisheries Biologist Evan Cartabiano.

Evans’ blue catfish toppled the previous state record held by Zakk Royce of Murfreesboro. In a span of 24 hours on Dec. 20, 2015 while fishing on Lake Gaston, Royce set his first state record with a fish that weighed 91 pounds and measured 53 inches in length. He then beat his own record by catching a 105-pounder (55.75 inches in length) a short time later.

To qualify for a N.C. Freshwater Fish State Record, anglers must have caught the fish by rod and reel or cane pole, have the fish weighed on a scale certified by the N.C. Department of Agriculture, witnessed by one observer, have the fish identified by a fisheries biologist from the Commission, and submit an application with a full, side-view photo of the fish.

The world record for a blue catfish is 124 pounds. That one was caught May 21, 2005 from the Mississippi River near Alton, IL.

The blue catfish typically has a bluish-gray body above, fading to white on its sides and belly.

They are most common in large rivers, feeding primarily on or near the bottom. They eat aquatic insects, crayfish, fish, freshwater clams and freshwater snails.

They are also found in lakes, where they spend much of the time in open water searching for shad and other prey fish.

AHOSKIE – They weren’t about to let a piece of history slip away. Windsor’s junior American Legion baseball team had... read more