RALEIGH – The public relations firm representing Thomas and Evon McLean, the buyers of the Roanoke Rapids Theater, on Wednesday of last week released the venue’s timetable at the company’s headquarters in Raleigh.

Jack Glasure, senior vice president of French West Vaughan, said on the day of the July 23 closing a new website with a new URL will be launched.

The new name of the theater, which will highlight Roanoke Rapids, will also be released.

Looking at a map now, Glasure said, the area where the theater is can be considered a black dot.

“We want it to be a red star. We think the name will pop,” he remarked.

On July 24 the new owners take over and on July 30 the new administrative staff of the theater begin their duties.

The theater will partner with Etix and on August 10 the first show tickets will go on sale.

The acts will encompass Motown, country, comedy and cirque performances as well as tribute concert events and other entertainment opportunities, Glasure said.

A job fair is planned for August 17.

“It’s going to be interesting to see who is excited and who’ll want to work in entertainment,” Glasure noted.

September 15 will be a soft opening event with a piano bar and on September 21 will be the first live performance.

Officials are still in the process of hammering out the contract and Glasure declined to immediately name the act.

There will be Friday and Saturday evening shows for the first live performance and a Saturday matinee may also be in the works.

“It will be heavily advertised beginning in mid-August,” Glasure said.

On November 10 the official grand opening is set to coincide with Veterans Day. Glasure said the theater is working in conjunction with Collier Harley-Davidson for a Veterans Day salute with a prominent Nashville recording artist. The theater will be engaging non-profit, charitable partnerships for the event.

The theater has entered a partnership with EastCoast Entertainment, which is based in Richmond and has a Raleigh office along with other offices on the East Coast.

“What’s nice is we’re bringing Elizabeth Branham back to help EastCoast get on track,” Glasure said.

Etix, Glasure said, has “been very impressed with the service to transfer the domain.”

Outdoor advertising is targeted for a 30-mile radius north and 60 miles south. 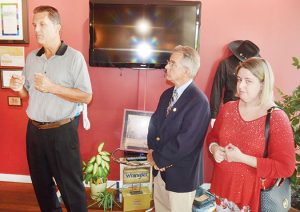 “The billboard presence will consist of very compelling creative and art. We have to create an impact to drive people to the exit,” Glasure noted.

There will be a heavy social media presence and the presence of digital messages. There will also be ads created for music apps such as iHeartRadio and Spotify.

Roanoke Rapids Mayor Emery Doughtie, who attended the briefing along with City Manager Joseph Scherer and Councilman Wayne Smith, said, “I’m kind of overwhelmed with gratitude. Since I’ve been mayor we’ve had many come to us and say they’re here to help us. No one has rose to the level you have. We realize the theater is a tremendous opportunity. We see that it is has potential to rise.”

Doughtie said he is more excited about the possibilities. “We have things going on to the make the town better.”

Mr. McLean said, “We do think there is great entertainment potential here. I think it will be good for all of us.”

Mrs. McLean said, “We’re excited about the opportunity. I think it will be a benefit for all of us.”

Helping to bring the sale of the venue to the point it is now is Beau Petty, Mrs. McLean’s son.

“Really, Beau started the process,” Mr. McLean said. “He found there was a possibility. He realized there’s an untapped potential. Now it’s like we’re rounding third base and approaching home plate.”

While there will be the potential for development around the theater, Petty said getting theater running is the immediate goal.

“We’re trying to kick start that,” Petty remarked. “It would be great to see businesses complementary to the theater. Right now the focus is getting the theater on the ground. I believe success will beget success. We think Exit 171 is a big, big deal. You have a special piece of property.”

Petty said earlier in the meeting, “We’ve been busting our butts with bands. It helps to have Elizabeth.”

Petty said the theater plans to provide a variety of entertainment and the North Carolina Symphony is on the shortlist of performers to bring back to the venue, along with comedians and illusionists.

“Christmas is going to be big,” he said.

The aim is to have activity six to seven days a week, he said.

Another aim, Glasure said, is not only to serve the community, but to reach some of the quarter of a million people riding the interstate daily.

Glasure said another idea still being worked on is allowing performers traveling the interstate to use the venue for rehearsals and allow the public, perhaps for a cover charge or if the bands agree, to watch the rehearsals free of charge.

Smith, who is has been vocal about the city selling the theater, said, “I’m really excited about what’s happening with the theater. We have an excellent mayor, an excellent city manager. I’m looking forward to it.”

Branham, who was responsible for bringing Old Crow Medicine Show to the theater in 2010, said, “It’s exciting to have the opportunity to participate. It’s humbling to be part of something so significant.”

Said Medlin: “It’s going to be a new destination for the East Coast. The Halifax Convention and Visitors Bureau is delighted to be a part of this.”

AHOSKIE – What began as more than $21 million of debt service for the town of Ahoskie is gradually eroding... read more