Parker retires from US Coast Guard

A 1981 graduate of Ahoskie High School, Mike is the son of Mr. and Mrs. Beryl Parker of Ahoskie.

Lt. Commander Parker has served at Training Center Petaluma since September 2013 when he assumed the duties as the Medical Director and Division Officer for the Coast Guard Medical Support Schools. He has been in charge of all training delivered to over 500 students annually, including international students. These students are trained as EMTs, Health Services Technicians and Independent Duty Health Services Technicians who operate in remote environments. 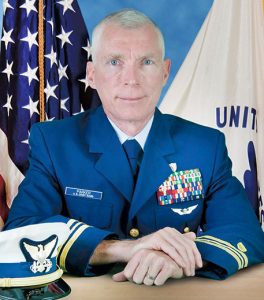 Parker’s career began when he reported to basic training in Cape May, NJ on July 6, 1981. After basic training he reported to Naval Training Center Orlando, FL for Signalman and Quartermaster schools before reporting to CGC STEADFAST in St. Petersburg, FL. He later changed job specialties to Health Services Technician and served at multiple units, including the CGC GALLATIN homeported in Governor’s Island, NY. There, he served as an Independent Duty Health Services Technician and was involved in several high profile Cuban migrant interdictions.

Parker advanced to E8 Senior Chief Petty Officer in 1998, and he was promoted to Chief Warrant Officer in 2000. He became a commissioned officer in 2002 after completing the Inter-service Physician Assistant Program and receiving a Bachelor of Science Degree from the University of Nebraska. His first duty station as a newly commissioned Ensign and Medical Officer was at Charleston Naval Hospital. While there he completed his Master’s Degree in Physician Assistant Studies in 2004.

During his next assignment at MLC Atlantic in Norfolk as the Assistant Chief of Operational Medicine, Parker was selected to serve in the prestigious White House Medical Unit. From 2009 to 2013, he traveled around the world in direct support of the President’s and Vice President’s visits. He was also the lead medical contingency planner for the 2013 Presidential Inauguration.

Parker is married to his wife of 33 years, Susan Revels-Parker. They met and married in Houston, TX. Mrs. Parker has a Master’s Degree from Longwood University, and she also works for the Coast Guard as a training curriculum designer.

They have two sons: Kalsin, a student at James Madison University, and Forrest, a graduate of Virginia Commonwealth University. Forrest is also a Coast Guardsman stationed in Petaluma, CA.

WINTON – The Hertford County Department of Social Services recognized Glenda Simmons on Thursday, June 28, with a luncheon and... read more