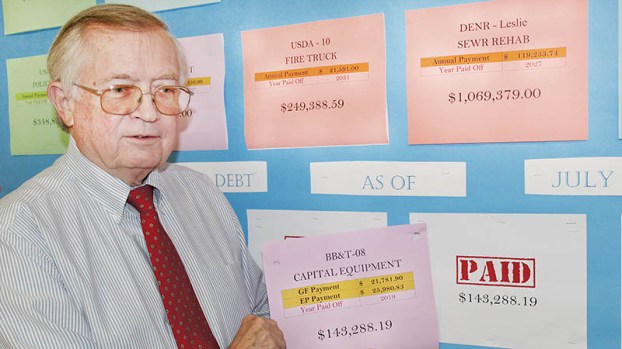 Ahoskie Town Council members Charles Freeman (top), Jamie Burns (below, left) and Matt Bradley (below, right) celebrate the town paying off some $430,000 in loans during the last budget year, as part of reducing the town’s $21 million debt. The ceremony, akin to a note-burning, took place at Tuesday evening’s Council meeting. | Staff Photos by Gene Motley

AHOSKIE – What began as more than $21 million of debt service for the town of Ahoskie is gradually eroding thanks to sound fiscal management.

At the July 10 meeting of the Ahoskie Town Council, Town Manager Kerry McDuffie once again beamed with pride for his staff, the Council, and the town’s employees as more of that debt is eliminated.

Over 10 months ago, Town Clerk Joleatha Chestnutt prepared a colorful bulletin board display at the Ahoskie Fire Station in advance for the meeting. It showed the town’s debts ranging from loans on everything from upgraded facilities to public works projects.

“Normally when it comes to debt you try to keep things quiet, and just don’t say a whole lot about it,” 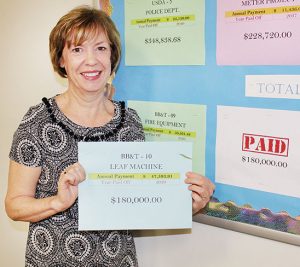 McDuffie said last September. “I think it’s important that we have something other than just a piece of paper in the back of a packet for folks to see.”

As of July 1, 2017 the town had some 21 debts. Each one was figuratively arranged neatly in rows on the bulletin board. Gradually since that time, beginning with the smaller debts, shielded on the board by sheets of colored construction paper, displaying the individual debt and amount, were eliminated.

For the last budget year (2017-18) six total debts on loans for town services have been paid off.

Originally, the totals on the board ranged from a $73,000 loan with PNC bank for water meters to the nearly $8.9 million owed on the town’s upgraded Wastewater Treatment Plant. McDuffie said at that time the combined minimum payment due was $1.9 million annually on a total of $21,273,000.

The Town Manager proposed paying off the smaller amounts and then using the surplus to begin paying of the next smallest and so forth up the line. He also recommended to the Town Council that no more loans be taken out; everything would now be paid in cash.

A ‘silver lining’, if you will, would be to do more than pay-off debt, but also use the funds saved for other projects such as new windows in the town gym.

“The windows in the gym were not going to be able to happen during last year’s budget year,” McDuffie said. “So we moved that money that would’ve been used for gym windows over (in the town’s General Fund) to pay off debt. The money that was going to be used to pay the minimum debt payment on loans 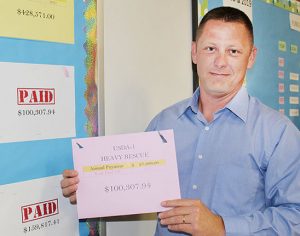 Topping off the Tuesday evening presentation, three Council members came to the bulletin board and one-by-one removed the colored paper coverings, revealing in bright back letters the word ‘PAID’.

First, an original $100.3K loan for the Heavy Rescue Fire Department Truck was reduced down to $76.8K and as Councilman Matt Bradley – himself a volunteer fireman – ripped away the purple sheet it revealed the debt has now been paid off. It was also done three years ahead of time, having had an original payoff date of 2021.

“During the 2016-17 budget year we only collected 90 percent of the revenue we budgeted, and we spent 94 percent of that,” McDuffie said Tuesday. “We spent more than we took in.”

The Town Manager had much better news to share as the 2017-18 budget year closed out.

“We took in 99 percent of the revenue that was budgeted,” he declared. “We still have to do a little better, because we’re still about under; but we spent 97 percent of what we budgeted, so we have 2 percent money.”

McDuffie hailed the six payoffs coupled with Ahoskie now spending less money than the town took in; he also gave a salute to those he felt were responsible.

“To the staff, to the department heads: you are all doing an awesome job,” he remarked. “Keep it up.”

Swinging for the fences

WASHINGTON, DC – A local teenager is one step away from winning a national title. Owen Black, age 13 of... read more