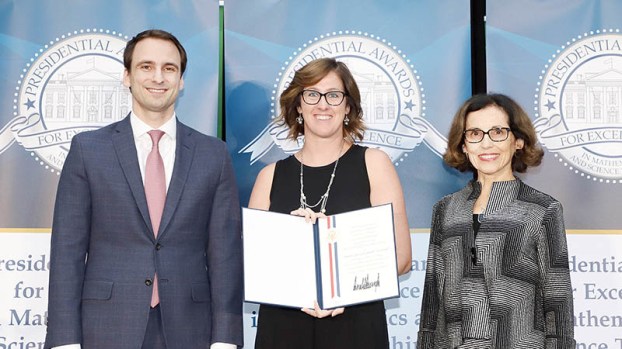 Shown from left are Michael Kratsios, Deputy Assistant to the President/Deputy US Chief Technology Officer, Heather Landreth, and Dr. France A. Cordova, Director of the National Science Foundation. | Contributed Photo

WASHINGTON, DC – Gates County native Heather Craddock Landreth was named the recipient of the Presidential Awards for Excellence in Mathematics and Science Teaching. She is the daughter of Terry and Cleo Craddock of Eure.

The Presidential Awards for Excellence in Mathematics and Science Teaching (PAEMST) are the highest honors bestowed by the United States government specifically for K-12 mathematics and science (including computer science) teaching. Established by Congress in 1983, the President may recognize up to 108 exemplary teachers each year.

Recipients were named on June 25 and spent several days in Washington, DC to participate in recognition events.

“They said so many times, ‘You are one of our nation’s top teachers.’ It’s so amazing to hear that because I feel like all teachers work so hard every day,” Landreth said. “I wish more teachers had the opportunity to have the experiences I’ve had this past week.”

The awards ceremony took place in the courtyard of the Smithsonian Art Museum on Tuesday, June 26t and includes $10,000.

While teaching all subjects, Heather’s focus on science, technology, engineering and math (STEM) sets her apart from her peers. She and a team of colleagues were awarded a $71,000 grant for class sets of iPads in their kindergarten through third grade classrooms. She found that keeping children engaged with the ever-changing technology from a young age is a valuable asset in their development.

“We talked a lot about not just STEM, but having a collaborative environment in which students can work in teams,” Landreth noted. “When I think of effective teaching, it is not students sitting silently in desks while the teacher stands in the front of the room. It’s about finding problems and working together to find solutions to those problems. This can be done through STEM activities. Integrating all of those pieces and communicating effectively is what students are going to have to do in the real world. Why not start now?”

During their time in Washington, DC awardees had the opportunity to participate in the State-Federal Education STEM White House Summitt.

“We were able to give feedback on the new Federal STEM five-year Strategic Plan,” Landreth stated. “We were told this was the first time they’ve allowed teachers to give input in this way. We had discussions with representatives from the National Science Foundation, the White House Office of Science & Technology Policy and other state level stake holders. We talked about how this plan might look in our respective states and looked at how we could reach as many students as possible to get them interested in STEM education.”

Landreth currently teaches at WH Robinson Elementary in Winterville. In her 14 years of teaching she has been named Teacher of the Year at the school level and a Pitt County finalist two times. She has participated in committees at the district and state level numerous times to impact student learning in the area of mathematics. She leads various trainings each year on how to effectively implement the use of technology in elementary classrooms.

While Heather is enjoying all the opportunities this award has to offer, she sees it as a learning experience.

“Being able to collaborate with teachers from across the nation has been so inspiring! The connections I’ve made can only improve my teaching. I cannot wait to see the impact it will have for my students,” she concluded.

Awards are given to mathematics and science (including computer science) teachers from each of the 50 states, the District of Columbia, the Commonwealth of Puerto Rico, the Department of Defense Education Activity schools, or the U.S. territories as a group.

The award recognizes those teachers who develop and implement a high-quality instructional program that is informed by content knowledge and enhances student learning.

Awardees serve as models for their colleagues, inspiration to their communities, and leaders in the improvement of STEM (including computer science) education. The National Science Foundation administers PAEMST on behalf of The White House Office of Science and Technology Policy.