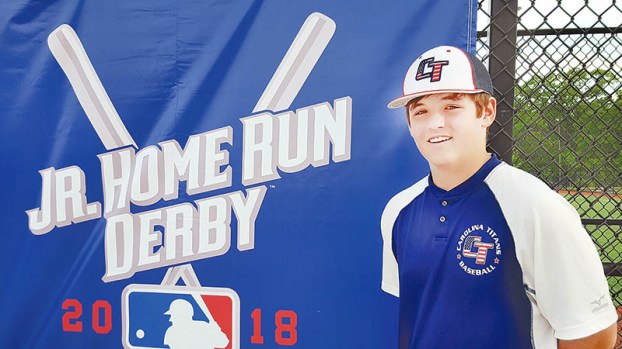 Owen Black of Murfreesboro has slugged his way to the National 14U Major League Junior Home Run Derby, scheduled for Saturday in Washington, DC. | Contributed Photo

Swinging for the fences

WASHINGTON, DC – A local teenager is one step away from winning a national title.

Owen Black, age 13 of Murfreesboro, is among the eight finalists in his age group who will swing for the fences in the nation’s capital this weekend when he participates in the third annual Junior Home Run Derby National Finals sponsored by Major League Baseball.

Black, the son of Rodney and Michelle Black, qualified for the national finals on the strength of winning one of the eight regional finals held Mother’s Day weekend. That regional win came in Washington, DC

Ironically, Black and his parents will return to that same city for the nationwide competition, which will coincide with Major League Baseball’s annual All-Star Game. That “Mid Summer Classic” is hosted this year by the Washington Nationals.

“It’s so surreal when thinking about the experience Owen will have on Saturday as well as the ones he’s already enjoyed leading up to this point,” said Rodney Black, who is the Forest Service Ranger in Northampton County. “Just seeing his name on the national map of those that got to this level sends shivers up and down my spine.”

The father said his son was “dialed in” for the pending competition.

Now as the family’s focus shifts to this weekend, the attention is more about the experience rather than the outcome.

“Win, lose or draw….it makes no difference,” said the proud dad. “Just the thought of seeing your son, your flesh and blood, having this opportunity is so gratifying. Owen’s mother and I couldn’t be prouder, just as we know the parents of the other seven finalists are proud to see their sons at this high level of competitive spirit.

“Owen is proud as well, proud to represent Murfreesboro, his school (Central Middle in Gates County) and the state of North Carolina,” Mr. Black added.

The family will fly to D.C. on Friday, part of their all-expenses paid weekend. Their itinerary is packed full for activities.

“For Owen, they told him to basically bring his toothbrush as everything else is provided to him through Major League Baseball….clothing, caps, a custom baseball bat, etc.,” said Rodney Black.

The Junior Home Run Derby is scheduled to take place beginning at 8 a.m. on Saturday at Nationals Park. That will be followed by MLB’s annual Fan Fest.

On Sunday, the Blacks and other invited guests will witness the MLB Future Stars Game. Monday’s agenda features early admission to the MLB’s Home Run Derby where Owen, Rodney and Michelle will be able to watch the pro baseball all-stars taking batting practice prior to the annual Derby, which will be televised nationally.

“Maybe Owen will get lucky and get to meet some of the Major League players….that will be a dream come true for him,” noted Mr. Black.

The family has tickets for the actual Home Run Derby contest. They will fly home on Tuesday before the annual All-Star Game.

To gain the national finals, Owen initially won the title at a local district qualifying tournament held April 14 in Rocky Mount. There he hit 27 homers on just 37 pitches.

From there he advanced to the Regional event on Mother’s Day weekend in Washington, DC. There, in round one, Owen hit the leading total of eight homers to advance to round two. He was the first batter up in round two and smacked a total of 10 homeruns. His effort was not equaled, and he won the event.

It has already been a busy summer for the Black family. Owen’s “travel-ball” team – the Carolina Titans – just recently returned home from a tournament held on baseball’s “hallowed grounds” – Cooperstown, NY.

“What an experience that was,” Mr. Black exclaimed. “The boys had a blast competing, finishing in the top 25 of over 100 teams in the tournament, and also having the chance to visit Major League Baseball’s Hall of Fame.”

While in Cooperstown, Owen represented his team in a Home Run Derby. He placed third in a field of 106 competitors, missing out on a chance to be in the finals by one homerun.

During the game competition there, Owen slapped nine homeruns, to include a grand slam, for his team. He finished with a .750 battling average and an on-base percentage of .900.

“Owen offers a special thanks to his coaches past and present that helped him get to this point that include Gary Stevens with the Young Bucks, “Uncle Terry” Edwards with the Young Bucks and Gates County Central Middle School, and current coach Brandon Peebles with the Carolina Titans Blue team from Elizabeth City,” concluded Rodney Black.

By LANCE MARTIN rrspin.com HALIFAX – Glen Ryland will spend at least 17 years in prison after he pled guilty... read more