AHOSKIE – The BAT Mobile visited Ahoskie last week. However, neither the Caped Crusader nor his trusty sidekick Robin was seen.

Rather, this BAT Mobile was deployed to the local area for another type of crime-fighting effort – that of reducing the incidence of impaired driving by providing support and resources to local law enforcement and the North Carolina Court System.

The Ahoskie Police Department coordinated the local visit by BAT (Breath Alcohol Testing), which arrived in a specialized RV, complete with breathalyzer work stations and a room used by a Hertford County Magistrate who set bonds and court dates for those arrested. 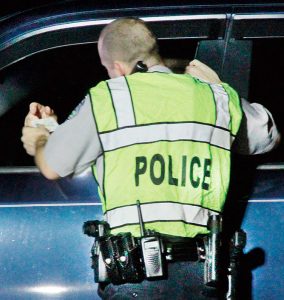 An Ahoskie Police Officer observes a driver’s license at a checkpoint on US 13 South of Ahoskie.

Carolina Highway Patrol also took part in a DWI checking station set up on the night of July 4 on US 13 just south of Ahoskie.

The operation – “Stay Safe; Don’t Drink and Drive” – also included a checking station on Lee Jernigan Road near Pierce Ave. and one on the Ahoskie-Cofield Road near Willoughby Road.

Additionally, the Highway Patrol was out in force on local roadways.

“We appreciate the combined efforts between the Highway Patrol, the Hertford County Sheriff and his deputies, and our department that led to an event designed to make our town and our county a safer place to travel,” said Ahoskie Police Chief Troy Fitzhugh.

The DWI checkpoint on US 13 resulted in several citations and/or arrests. They included carrying an unauthorized concealed weapon, driving while license were revoked (2), no operators license (3), expired vehicle registration (3), improper child safety restraint (3), possession of marijuana, possession of marijuana paraphernalia, open container of alcohol, and an outstanding order of arrest (failure to appear in court).

“I thank all the officers involved in helping with this event,” Sgt. Woodard said. “This is a proactive approach to ensuring that the citizens of Ahoskie and Hertford County feel just as safe on the streets and the highways as they do when they are in their homes. This event was a success, and more events like this one will continue in our area.”

The BAT Mobile and its accompanying law enforcement training and public education programs operate under the umbrella of the North Carolina Department of Health and Human Services.

Each unit is priced at $750,000 and there are seven stationed in different areas of North Carolina, plus two others (older models) that serve as back-ups. The money used to purchase and maintain the units come from state and federal grants, plus fines paid by those arrested and prosecuted for DWI.

Bryon Varnell serves as the BAT Coordinator for the northeastern North Carolina counties. Varnell, formerly a Highway Patrol Trooper, resides in Edgecombe County. The BAT Mobile he drives is stationed in Greenville.

“Whatever the needs are – from enforcement at these DWI checkpoints to offering alcohol awareness programs at our schools – I’m available to serve the counties here in the northeast,” Varnell said shortly before setting up the BAT Mobile for the July 4 event.

Part of his job is to help train law enforcement officers to used the Intox EC/IR breath alcohol testing instruments as well teaching them how to perform the standard field sobriety tests.

Once in-place at the checking station, Varnell extends the width of the expandable RV unit. He then brings the six Intox instruments to life, having them ready for use by the law enforcement officers on scene.

The BAT Mobile also contains a DRE (Drug Recognition Expert) Room. There, certified DRE officers can perform evaluations of drivers who may be impaired on something other than alcohol. That room allows the officers to perform blood pressure checks, draw blood samples, and use other visual tests.

“With their high level of training, those officers are able to determine what type of drugs a person may be on at that time and approximately how much of those drugs are in their system,” Varnell explained. “This type of evaluation is becoming more and more usual nowadays due to the use of illegal narcotics as well as the misuse of prescription medication.”

While some drivers become agitated having to stop at a checking station, Varnell said it’s a minor inconvenience.

“The majority of the drivers are clean and sober and following all the rules of the road when it comes to their vehicle license and registration and protecting the safety of themselves and their passengers,” he noted.

The BAT Mobile itself serves as a rolling billboard to promote the anti drinking and driving message.

“When they see me on the road or parked beside the road, if that intimidates a driver from deciding not to operate a motor vehicle due their consumption of alcoholic beverages, then we’ve done our job,” Varnell said. “It’s a simple decision to make; if you choose to drink, that’s fine, but do the right thing and find someone sober to drive you home.”

That promotional effort also sends the BAT Mobile to high schools, colleges and universities. It features instructional videos – played on flat screen TVs inside – that carries the don’t drink and drive message.

The BAT Mobile is also used at boating while impaired enforcement events. It has been used as a promotional tool at the North Carolina State Fair, at military safety expositions, and at employee health fairs.

School Board races heat up