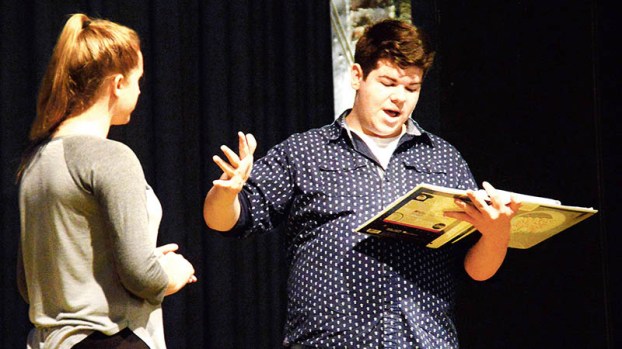 Colleen Curley (left) takes direction from Jordan Martin during rehearsals for Mary Poppins, Jr. at the Gallery Theatre. | Photo by Will Metcalfe

AHOSKIE – There’s some “Practically Perfect” entertainment coming that will make your summer holiday jolly. The Gallery Theatre at 117 W. Main Street, Ahoskie, presents its 52nd Annual Summer Youth Theatre Workshop (SYTW) at 7 p.m. on July 13-14 with a double-bill of The Boy Who Cried Wolf and Mary Poppins, Jr.

The action starts with The Boy Who Cried Wolf, a reimagining of Aesop’s fable. In this delightful version of the familiar tale, a bored boy named Roy (Haiden Williams, returning to the Gallery for his second year) tends to his family’s flock, only to be tempted to showcase his “wolf-crying” skills by his crush, the pig-tailed Pearl (Marissa Lashbrook, a Gallery newcomer). Directed by Gallery veteran Hope Miller, this comedic short play is sure to delight and entertain while humorously revealing its message.

The workshop this year returns to a tradition from Gallery seasons past, offering two shows for the price of one. The second show is Disney’s Mary Poppins, Jr., the popular musical about a magical nanny showing some children a Supercalifragilisticexpialidocious experience as they learn to value themselves and each other.

This stage version of the famed Walt Disney story is helmed by long-time Gallery performer and SYTW veteran Jordan Martin, who moves from appearing on stage to behind the scenes, serving as director, musical director, and co-choreographer. Martin, who is about to begin his second year at ECU as a student in their Musical Theatre program, began his career as an actor in Gallery summers. His first role was in Aladdin in 2005, and he has taken part in the workshop ever since, starring in such popular shows as Godspell and Footloose. Martin brings his wealth of experience and talent to this summer’s show.

“It’s tough to pick one aspect I like best,” Martin said, weighing which behind-the-scenes element he enjoys the most.

He said he was grateful to get to choreograph, since he did not normally have that opportunity, but he finally settled on enjoying musical direction the most. This is essential for this musical, with all of its famous songs, but the Gallery is fortunate to have him helping with all aspects. Having started as a performer, Martin can bring to his cast his own knowledge and experience, and that personal history as an actor helps him lead them through the rehearsal process.

Tackling this famous show was part of the challenge for them all, particularly as they recognize that its themes are universal. Jordan Martin sees that this play “goes beyond the magic of Mary Poppins and looks at a broken family and the journey it takes to bring them back together. It’s about how a person’s life can be changed in most unexpected,” and delightful, ways.

Martin’s history of moving from the youth workshops to the full shows of the regular season is paralleled by several of this summer’s young cast members.

Catie Wise has nine Gallery shows under her belt in just five short years, having danced in Christmas shows, performed in the SYTW, and acted in full dramas during the year. This year, she offers her energy both onstage (playing Neleus) and off (co-choreographing dance numbers). Having performed throughout the year, she knows the shorter summer session has a steep learning curve, but she is up to the task, and this year she can help others with their learning of the numbers. An experienced dancer, she is ready to help these youth master their steps.

Wise loves to perform and help others perform, saying, “Performing is a way to express feelings. Acting is an art, and through performance we can let out emotions. When I perform, I can tap into my emotions. So can the audience as they connect with our acting.”

Eleanor Boyd has similarly made her mark on the Gallery for the last four years. For the SYTW, she has appeared in several roles, including Rafiki in last year’s Lion King and in the lead role this summer as Mary Poppins. Boyd acknowledges the pressure of stepping into this famous role but also finds the entire process fun, for she has been able to make the role her own.

She notes the excitement of playing “not a really normal person,” and finds Poppins’ unpredictability one of the most exhilarating aspects to bring to her performance. She finds the role is a challenge, but Boyd has proven multiple times on the stage to be able to meet those challenges.

The area is lucky to have these talented young people to perform. Both Colleen Curley and Autumn Olson have made the Gallery their second homes, acting both in the SYTW and in the main season. Both will be part of the US premiere of Bagdad Cafe this September, as they are part of the fall Gallery musical, already in rehearsals. The two love the family atmosphere of the Gallery, and appreciate that, as Olson says while sitting proudly with her extended family, they “stick together no matter what.”

Both take what they have learned in their young careers and pass it on to even younger actors. Olson (Katie Nanna & Miss Smythe), who enjoys the fact musicals let performers sing, dance, and act, loves that she gets to teach the younger ones in the workshop. “We’re trusted to show them the ropes.”

Curley (Winifred Banks), who is also a triple threat, sees each show building upon prior work and is excited that returning to SYTW gives her “the chance to learn and the chance to teach; people here are awesome to let us help each other when we go on stage.”

After appearing in The Lion King last summer, Maddy Powell couldn’t wait to take the stage again and did so as Betty Parris this past winter in The Crucible. She returns to the SYTW to sing, act, and dance in several roles, including Joannah Northbrook, a Policeman, and as part of the Ensemble. Evoking Robert Smith, Powell speaks to the magic of performing on stage: “When you’re onstage, the real world drops away for that time. It’s pretty intense.”

Zach Wise understands that intensity. Having been part of four workshops and also serving as assistant stage manager of Noises Off last spring, this summer he takes the lead role of jack-of-all-trades Bert. Wise sees performing as a challenge to overtake and feeds off the energy that performing well brings him. He finds acting invigorating. “You feel a rush when you go onstage–the butterflies are mounting with each moment, but then the lights come up and they melt away the second you hear the crowd and start performing. It’s like a roller coaster, and I would ride it again and again.”

Whether they are in their first workshop or making a return to the Gallery stage, the youth are ready to entertain and delight. These young people are part of a SYTW of 39 energetic actors, singers, and dancers. They will have you wanting to join them as they “Step in Time” and “Go Fly a Kite,” and you will thrill as they bring to life two classic stories in one magical evening.

The Boy Who Cried Wolf, written by Stacey Lane, is presented through special arrangement with Pioneer Drama Service. Mary Poppins, Jr., with book written by Julian Fellowes, is presented through special arrangement with Music Theatre International (MTI). All authorized performance materials were also supplied by MTI (www.MTIShows.com). The original music and lyrics are by Richard M. Sherman and Robert B. Sherman, with new songs and additional music & lyrics by George Stiles and Anthony Drewe. This adaptation of the Walt Disney film and the original stories by P.L. Travers was co-created by Cameron Mackintosh and adapted by iTheatrics under the supervision of Timothy Allen McDonald.

Tickets are available through the Gallery Theatre Office or can be bought at the Box Office. Ticket prices are $15 (adults), $13 (seniors, 62+), and $11 (students).

MURFREESBORO – Dr. Gladys DeJesus served Chowan University as a Professor of Economics for 25 years prior to announcing her... read more