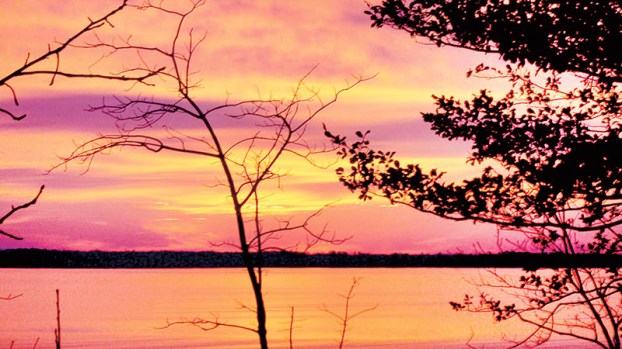 While exploring an inner coastal route to the Chesapeake Bay, did those onboard one of the ships that transported English settlers to the now famed Lost Colony enjoy viewing a glorious sunrise over the Chowan River? Purchase a new book – “In Pursuit of Dorothie” – and see for yourself. | Contributed Photos

MERRY HILL – For much of his later years in life, Don Upchurch enjoyed a grand and picturesque view of the Chowan River.

As such, it’s a safe bet he would peer out onto those pristine waters from his Bertie County home perched high on a steep bank overlooking the river and visualize a dual-mast wooden ship sailing upstream in the late 1500’s in search of an inner coastal path to the Chesapeake Bay.

Up until his death in October of 2015, Upchurch – a veteran radio broadcaster in Ahoskie and noted historian – spent the better part of six decades gathering facts and sorting through numerous clues as he performed his own search regarding the fate of one of the ships that transported settlers from England to the now famed Lost Colony on Roanoke Island.

Despite the fact that Upchurch passed away prior to his life’s work being published in print, “In Pursuit of Dorothie” is a must-have book for those who enjoy a healthy blend of history and mystery.

The finished product – available in paperback at amazon.com (search for it by title) and locally at Wisdom Produce (located on US 13 near the Ahoskie Walmart) – is through a tedious, and loving, effort by Lucy Rebecca Daniels, the widow of Upchurch.

“Don heard the story of the Dismal Swamp Schooner as written by F. Roy Johnson (the now late author, newspaperman, and historian, formerly of Murfreesboro),” said Daniels earlier this week as she dropped off a copy of the book at the office of Roanoke-Chowan Publications. “He got a chance to interview Mr. Johnson in 1966 in his shop and became so intrigued about that story.”

From that point forward until 2015, Daniels said it was a “slow burn” process for Upchurch as he sought out each and every morsel of information he could find on the Dorothie as well as the Lost Colony, to include stories of how they possibly made their way inland and perhaps settled in the Roanoke-Chowan area and beyond.

“He read everything he could get his hands on,” she stressed. “Any book that referenced the Chowan River or any of our local counties, he grabbed it and read it from cover to cover.”

Upchurch took his research beyond what other writers and historians had uncovered.

“Don conducted his own interviews; he kept talking to people and sorting out all the details they offered,” Daniels noted. “He described it like pieces of a puzzle that just fell together. Those puzzle pieces led to his personal belief of what happened to the Dorothie and that’s what the book is all about.”

From his work, Upchurch produced an audio recording – four discs to be exact – bearing the same title of the now published book.

“The audio recordings were self-published, so it never really made it out of our little area….he gave some copies to the local libraries and sold a few copies to local individuals,” Daniels remarked. “We kept a dream of having those audio files published in print.”

That dream remained in her mind after the passing of Upchurch as Daniels undertook the mountainous task of transcribing the 36,000 words on the audio files.

“That was tough…..listen, and type, type, type,” she said. “I did receive professional (publishing) advice. I’m a registered nurse by trade and I’ve written a few short stories, but by no means do I consider myself an author.”

That advice helped Daniels sort through and heavily edit the words her late husband had recorded.

“I sort of gutted it, taking out conversational references, removing some of the redundancy, and straightening up the timeline tremendously,” she said. “I even took out the entire chapter about all the hoaxes surrounding this particular piece of American history.” 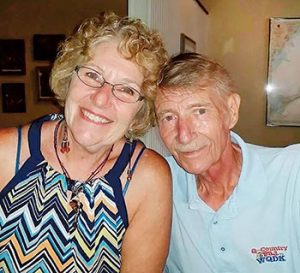 Lucy Daniels completed the work of her late husband, Don Upchurch, who spent decades researching what happened to the Dorothie.

Daniels also solicited the help of her daughter-in-law, Darl Jordan, a speech therapist by profession who is also a talented artist. Jordan produced all the illustrations for the book, to include a rendition of the Dorothie for the cover artwork.

“The maps she used, to include those taken from famed explorer John White, add such a great visual element to the book,” Daniels observed. “They reveal so much of Don’s research as to where he believed the Dorothie traveled.”

That route, along with the ship’s final resting place, is within the boundaries of the Roanoke-Chowan area…..but you’ll have to read the book to learn all the details.

“Our theory goes right along with the recent discoveries made in the Salmon Creek area (Bertie County),” Daniels said of a possible location where a portion of the members of the Lost Colony may have settled or visited.

The work put in by Daniels to carry her late husband’s interpretation of one of the greatest mysteries known worldwide was, in her words, worth the effort.

“I felt compelled to finish what Don started. I, like Don, love history and geography. This is a story that needs telling and it’s my sincere wish of those who purchase and read the book will find themselves intrigued by the same story Don put so much time and effort researching for all those years. To me, that helps keep his legacy alive,” Daniels concluded.

AHOSKIE – The Ahoskie Police Department is continuing its investigation into a June 23 shooting that left a local man... read more