WINDSOR – Bertie County’s Board of Commissioners were updated Monday evening at their regular meeting on existing and future road projects in the county.

Jerry Jennings, NCDOT Division One Engineer, gave the update to the board.

Preservation work on the NC 45 South Bridge over the Roanoke River. Work began on this project in October 2017 and with 80 percent of the repair done, is due to be completed in about 12 months time (October 2018) at a cost of $3.02 million.

Roadway improvements on NC 45 from the Hertford County line to Colerain. This project, begun in May 2018, includes drainage improvements, road widening, milling, resurfacing and long-life pavement markings. DOT expects completion at the end of October 2018 at a cost of about $1 million. 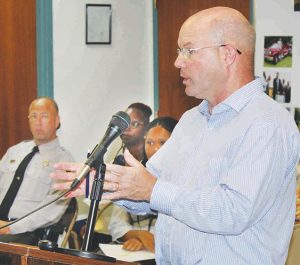 “There’s been a big effort over the last couple of years to put funds toward our larger bridges, our high value bridges,” explained Jennings, referring to the Roanoke River bridge project. “This is an effort to keep them safer and functional and to extend the life of those bridges as a good investment.”

“The (Highway 45) project will basically modernize the highway,” he added. “It will widen the pavement, add some to the shoulders of the road, improve drainage, as well as re-surfacing.”

Jennings went on to say there were also some six road projects in development, many beginning in 2019:

Replace the Quioccosion Swamp Bridge on US 13 (near Hexlena Rd.). Beginning around April 2019 at a cost of $1.7 million.

Realignment and Elevation Improvements on So. Granville St/US 13 Business in Windsor. A smaller project not able to go through the STIP (State Transportation Improvement Plan) program, but bigger than a maintenance plan, with a cost of just $515,000. This will provide better access to the town for emergency responders in case of a major storm event.

Replace the culvert on Ghent St. (Windsor) near Oak Grove Lane. Another small project ($250,000) not covered by STIP. Being done jointly with the town of Windsor.

NC 45 Roadway Modernization. Beginning where the 2018 project ends at Colerain and running south to the Washington County line. Includes curve and intersection improvements, widening, shoulder improvement, and resurfacing; scheduled, 2021-2023 at a cost of $23 million.

Future I-87. Feasibility study now available on upgrade of US 64 (Wendell to Williamston). 2nd feasibility study near completion from US17/US158 north of Elizabeth City to the VA state line (right-of-way: 2025, and construction due in 2027).

“The challenge we have with all these projects is they have to compete with all other projects across the state and across the region,” Jennings said. “This is a long-term vision, not something that’s going to happen in a year or two.”

Commissioner Stewart White inquired about the prospects of a state rest area on US 17 in Bertie County and what avenues are available to make it possible.

“There are guidelines statewide, and the challenge is that under the current STI (speed transportation initiative) legislation which determines how we select projects,” Jennings stated. “Rest areas are not currently considered through that process when it comes to funding, so an alternative funding source would have to be identified.”

Jennings further explained STIP identifies funding and scheduling of transportation projects in coordination with the Peanut Belt RPO (Rural Planning Organization) of Bertie, Hertford, Northampton, and Halifax counties. Its current 10-year program (2018-2027) are five years committed projects and five more of developmental projects. The current STIP contains $28 billion worth of total projects from highways to aviation to rail to ferry.

He added the Highway Maintenance Improvement Plan (HMIP), a five-year plan, is committed to $22.5 million in resurfacing over the next five years for 129 miles of roadway, and $4.03 million for the preservation of 175 miles of roads. Sixteen resurfacing projects are currently under contract across Bertie County; all of which are under contract for completion by June 2019.

“Under the Road Maintenance Improvement Place (RMIP) 50 percent of our maintenance allocations are for planned maintenance,” Jennings said. “The other 50 percent goes for things like mowing roadway grass, stop signs, and the light bill for traffic signals. In Bertie County alone we have almost $2 million allocated for maintenance activities.”

Commissioner Ron Wesson asked about potential flooding on Morning Road, off Woodard Road in the southern part of the county.

“Three days (after heavy rains) all those ditches were still filled with water,” Wesson said. “We’ve mentioned this several times and I don’t know where this stands on your priority list but its causing farmers a lot of distress because the ditches need cleaning out.”

Jennings offered to investigate and see where that fit in the plans. He also took on another inquiry.

Norman Cherry, who was in attendance at the meeting, asked about a similar ditch scenario concern located on Piney Woods Road in Lewiston-Woodville.

“The rain is flowing from the fields down toward the road and the ditches are not able to handle all that runoff,” Cherry said. “We’d like a way for the water to pass through so it doesn’t back up.”

For those with road maintenance concerns, there are two numbers for Bertie residents to call:

As for the four-way stop at the intersection of NC 11-NC-308, Jennings stated that he feels it is effective for safety sake, despite complaints. But admits not all motorists practice caution, nor obey the laws of right-of-way.

“I think there’s a learning curve involved,” he conceded. “I believe we can all do a better job of better educating folks on what the law says in that regard.”

“It’s inconvenient because folks are somewhat not sure what to do,” he added. “But that’s what makes it safer, because folks slow down, and they’re much more attentive moving through the intersection.”

Commissioner Tammy Lee complimented the DOT official for improvements on the list; not just roadways, but also work at the San Souci ferry. Jennings said the work has been long, but there will be a significant upgrade to the ferryboat – particularly mechanically – when it resumes operation sometime in August.

As a last comment, Lee said she hoped runway improvements at Tri-County Airport could be moved up in priority from their current start date of 2023.

WINDSOR – Recovering from flooding in Bertie County has been tough; finding a solution to these disasters may be even... read more