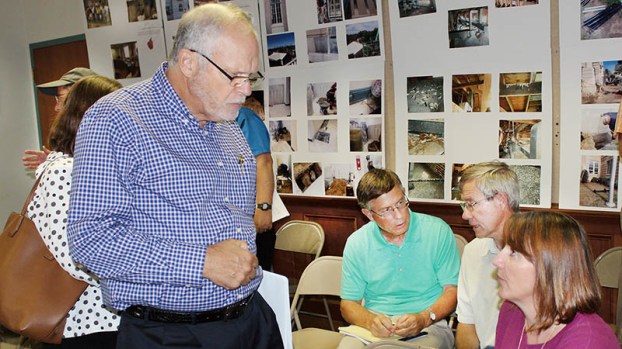 WINDSOR – Recovering from flooding in Bertie County has been tough; finding a solution to these disasters may be even tougher.

On Monday, members of the Windsor Town Council, along with Mayor Jim Hoggard, were joined by the Bertie County Commissioners during their regularly scheduled July meeting here to receive the Flood Mitigation Study for the town and the county.

Dr. Barbara Doll of NC State University, the study director, gave a presentation of her team’s findings. While the group concluded there is no simple or immediate solution, there are viable options to reduce grand-scale flooding, the likes of which were seen four times in the town and the county since 1999.

Their engineering recommendations were done to provide better understanding of the changing dynamics of Bertie County’s river drainage systems, and to produce strategies for upstream water impoundment, peak water flow reduction, and diversion of flood water, which would will ultimately mitigate flood damage for the county and in the town of Windsor.

The study was financed by the Golden Leaf Foundation, which approved $72,207 in grant funding to support the first of two flooding studies of the Cashie River Basin.

“Following a long hiatus of several decades without any severe events, the town has experienced four over a period of nearly 20 years,” Doll said. “So it has now become a constant worry and very problematic.”

Doll and her team of engineers and scientists from NC Sea Grant and NC State’s Biological & Agricultural Engineering Department; along with the Bertie County Cooperative Extension office’s Bill Lord and Director Billy Barrow, concluded that Windsor is particularly vulnerable to flooding and that during floods the Cashie River divides the town in half.

“Basically we asked why does it flood, and what can we do about it,” she stated. “We looked first at the sources of the flooding, and secondly we looked at how can we reduce some of the impact.”

Back in the fall, during a presentation of her team’s preliminary findings, Doll presented various scenarios for consideration to reduce the flooding. These included reinstating various millponds in certain areas of the county, additional bridges, extension of the Cashie River Bridge at King Street Bridge, and upgrades made to existing drainage systems located throughout the Windsor area.

The study’s final draft spelled out engineering options and supervisory practices that could be undertaken targeted at reducing runoff and surface flow that reaches the Cashie from the watershed and its tributaries; plus solutions for reducing the direct flow of water into the town during flooding events.

Using data processing dynamics that examined flood models over the four major storms, the major scientific predictors focused on a 6.2 mile stretch of the river through Windsor. Factors included instances of near-record rainfall and river discharge records, and identified temporary upland water storage locations (former millponds) that would slow the flow of water during storm events.

Part of Windsor, she said, is in a flood-risk area.

Referencing the river at King Street, Doll said damage chances increase when the river reaches seven feet in flood stage. Eight-and-a-half feet would be the‘100-year storm’ stage and the damage there would be about $586,000.

“But when you get to around 11 feet (the Hurricanes Floyd and Matthew stage), the damages go up into the multi-millions of dollars,” she said.

Factors which determine the amount of flooding include how much it rains, how hard it rains, how long it rains, and how much moisture the ground already contains before a big weather event arrives. Wind direction and magnitude also influence the flooding model.

“If everything’s saturated, the river’s flowing high, winds blowing up from the Albemarle Sound, and we add in a big hurricane event, then that’s when we get a lot of problems,” Doll said.

The group also looked at land-use change: where forestland has now become farmland or shrub. Agriculture, they concluded, has not exponentially increased; so well-ditched watersheds on farmland had little effect on groundwater retention or back-up.

“As such, use of controlled drainage as a tool for flood mitigation has to be eliminated as a mitigation alternative,” she commented.

They also concluded that dramatically increasing the bridge deck span and elevation of the King Street Bridge would not significantly decrease water-surface elevation and flooding upstream of the crossing.

“The Cashie River downstream of Windsor to the confluence with the Roanoke River and Albemarle Sound is nearly flat, which may force more flood volume to backup into Windsor,” Doll said. “Water under pressure moving downstream of Windsor is a primary source of flooding during recent extreme events. This also slows the draining of flood waters away from Windsor and increases vulnerability of the town to wind driven tides and sea level rise.”

Controlled drainage, including impoundment and reservoirs, specifically at Hoggard’s Mill (present and future) would reduce water height at both York St. and Water St. (US-17 Business) at their current existing elevation. And while it would reduce flood risk for Windsor, additional reservoirs and impoundments in the river basin would benefit other structures and properties in Bertie County along the Cashie River as well.

Finally, Doll’s group looked at cost estimates for each of the proposed mitigation strategies. These assumptions were made based on best professional judgment, reported county tax values and previous project costs.

The large-scale dams and reservoirs provided the most damage cost savings for a Hurricane Matthew-scale event, but also have the highest up-front cost. The mitigation alternative with all three reservoirs (Upper, Lower Hoggard’s Mill and Cashie River) resulted in the greatest cost savings amongst all the alternatives, protecting all but the most vulnerable structures from flooding. However, raising the elevations of York Street and Water Street, with both as levee systems, did provide some damage cost savings. However, the study concluded both were somewhat limited when compared to other alternatives since the levee systems would only provide protection on the west side of the Cashie River and the town. She did offer another recommendation.

“FEMA has a method, not part of our study, where you can take your costs and amortize over 30 years or 50 years,” she said. “We looked at one storm, whereas they look at storms over a 30-to-50 year period; how much you could save. You might want to get more info and do your cost estimates using the FEMA method.”

Doll said she had spoken with NC Emergency Management about securing the funds for such a study method for the county and the town.

“They are open to it,” she revealed. “So I am hoping I can convince them to provide this for you since they’ve done it for the towns in the Neuse River basin.”

Doll said the reality from what her team’s study revealed is there is no single solution.”

“There’s no silver bullet,” she concluded. “For these extreme events, you have to pull out all of the stops.”

“Increasing King Street Bridge won’t really reduce water surface elevations. Neither are enlarged DOT crossings unless they build them up higher, which would provide some real benefit; but that would also depend on what’s upstream because you can’t flood homeowners out,” she said.

Doll said 15,000 feet of upstream storage is what would be needed to bring the Cashie’s peak flow below 10,000 cubic feet per second in the event of a major storm.

“Reservoirs on the Cashie and at Hoggard’s Mill would be required to make that happen,” she said. “So if you construct the both levees and build all three reservoirs, then you could probably defeat a Hurricane Matthew, but could you afford it – I don’t know. The best option is to combine everything to make that happen.”

Doll said NC Emergency Management had taken a hard look at the Neuse, the Lumber, and the Tar Rivers and modeled their work after what her group had done for Windsor and the Cashie.

“These are things that everybody’s looking at,” she said. “Getting the money to elevate structures is easier than removing structures. It’s worth pursuing more analysis to find the best option, whatever that is. We’re getting further.”

WINDSOR – With a law enforcement career spanning more than a quarter-century, Todd Lane, has been putting it all in... read more