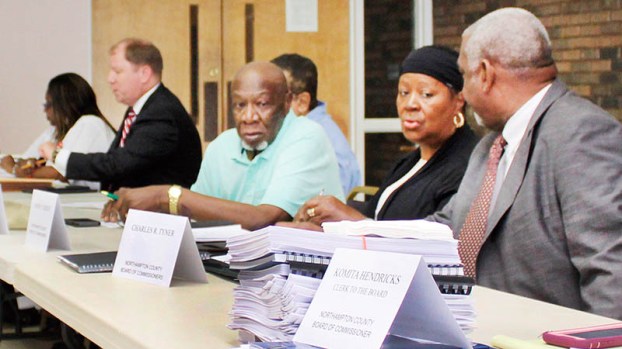 During the June 18 meeting of the County Commissioners, the Board approved the proposed budget for the new fiscal year. Despite previous pleas from the school board and school superintendent, the approved budget left intact large funding cuts to the school system.

A total of $3 million was appropriated to cover the school’s current expenses and $595,000 to capital outlay.

In response to these cuts, the Board of Education sent a letter to the Board of Commissioners requesting an additional $650,000 for current expense and $75,000 for capital outlay. A joint meeting of the two boards was then scheduled for Friday, June 29 in the hopes they would come to an agreement.

Friday’s meeting was presided over by John Jolly Jr, a third-party mediator from Raleigh. He allowed each side to present their positions. The two boards spent almost three hours discussing the funding request in open session before adjourning to a private mediation session with Jolly to continue to conversation.

School Superintendent Dr. Monica Smith-Woofter presented information during her opening statement on how the funding cuts would affect the school system in the upcoming year. The school system uses local funding to fill in gaps from state and federal funding.

One of the biggest issues affected by the reduced funding, she explained, would be teacher retention. When looking at the school achievement numbers, she noted that the school district’s best year was also the year they had the lowest teacher turnover rate.

“Northampton offers a three percent supplement to our teachers,” Dr. Smith-Woofter said, noting that extra money helps the district remain competitive against neighboring districts. “We need to be able to compete. Many of our teachers who stay in teaching go to the larger school systems.”

Reduced appropriation for capital outlay, she also explained, meant that energy efficiency expenditures and Central Office equipment upgrades would have to be put on hold.

Dr. Smith-Woofter concluded her presentation by reviewing numbers from the county’s financial information that would indicate some money is available for the school system. She noted that of the 78 line items listed on the budget, only 16 received a decrease in funding. Six of those 16 items were education/youth related.

“We do believe there are available funds that we can certainly consider additional funding to the school system,” she concluded. “We cannot function and operate and compete without equity.”

“There should be no doubt that we are all passionate and know the importance of educating our youth,” she stated. “While the Board of Education’s focus is on the public school system, the County Commissioners’ focus is funding 22 departments and 26 agencies while maintaining a 20 percent fund balance.”

Turner noted in particular the decrease of students enrolled in the county school system over the past 12 years.

“It doesn’t make good business sense or make us good stewards of the taxpayers’ money to continue to provide Northampton County Schools with increasing funds with less students,” she said before explaining the county would have to raise the tax rate by four percent to meet the funding request.

School Board members in attendance—Chairman Clinton Williams, Lucy Edwards, Richie Harding, Keedra Whitaker, and Lloyd Pitman—then had the opportunity to speak on why more funding was needed.

“Yes, it is true our student enrollment is dropping, but we still have students remaining here in Northampton County that we need to provide a quality education for,” Edwards explained, noting that they would have to cut important programs without the funding. “If your students participate in extracurricular activities, research show that their achievement is higher.”

Whitaker, a former teacher in the Northampton district, mentioned a dedication to Northampton County many of the school system’s teachers and staff have.

“Our teachers and staff deserve an increase in their supplements, they deserve retention bonuses because they’re loyal to us. Many of them are taxpayers in this district,” Whitaker stated.

“Every time you cut funding, you’re looking at cutting the future,” Pitman said in his remarks.

Chairman Williams noted that many people at the table were graduates of Northampton County Schools. He then used a metaphor about a bicycle race in order to illustrate his point about the importance of adequate funding. If one bicycle is good and the other one is missing a pedal, how can they both be expected to reach the finish line at the same time, he asked.

“We have an ethical obligation to make sure that our students get what they need, and we cannot give it to them with the kind of budget cuts we have this year,” Williams concluded.

In response, the County Commissioners—Chairman Robert Carter, Fannie Greene, Chester Deloatch, Geneva Faulkner, and Charles Tyner—had the opportunity to state their point of view on the matter at hand. They all maintained their position that the county did not have available funds to appropriate.

Faulkner, who was previously employed with Northampton County Schools, urged the school system to look at other methods to retain teachers and to reduce what she termed “wasteful spending.” She also pointed out that raising taxes to fund the school system would be a burden on taxpayers who already have to pay a high tax rate.

“We asked everyone to tighten up the bootstraps,” Faulkner said of the process to decide this year’s budget allocations.

“We’ve just got to do the best we can with the few dollars we have,” said Tyner, who has served on the Northampton Board of Education in the past. “Somebody’s gonna have to sacrifice.”

Tyner also quoted statistics about school funding throughout the rest of the state, noting that only 27 counties in North Carolina receive less money for current expense than Northampton gets, but they still continue to operate.

He suggested the school district should focus on selling empty school buildings and work towards closing the older buildings that are still in use like Squire Academic Center and Willis Hare Elementary school.

“We all are concerned about our children,” said Greene as she agreed with her fellow commissioners’ statements.

Greene stated that the Board had allocated each year “above and beyond what we are required to give the school system.”

Chairman Carter simply asked the school board to take their position into consideration, noting that a higher tax would affect everyone in the county.

The two boards engaged in more discussion after everyone had a chance to speak, and the Board of Education admitted the current expense funding shortfall was more urgent than capital outlay.

“We do not currently have enough current expense money to run the system as we believe it requires for an appropriate education,” stated Board of Education attorney Rod Malone. “We are hoping you will appropriate more money into current expense so we can operate.”

After spending time in a private mediation session, both boards reached an agreement Friday afternoon. The Board of Commissioners then ratified that agreement during their regular meeting held on July 2.

The terms of the agreement included reducing the capital outlay allocation to increase the current expense funding.

“This is not new money,” said County Manager Turner as she presented it to the commissioners on Monday. “This is money that was within our proposed 18-19 budget.”

As stated in the agreement, $240,547 will be moved from the capital outlay allocation to current expense. The county will also move a total of $259,453 to current expense from funds previously reserved to purchase a new school site.

This brings the school system’s total current expense appropriation to $3.5 million, adding $500,000 to their original funding allocation. The capital outlay appropriation is reduced from $595,000 originally to a total of $354,453.

The agreement notes that if the capital outlay fund is exhausted, the County Commissioners will agree to schedule a meeting at the Board of Education’s request in order to address emergency capital outlay needs.

The County Commissioners will also consider an additional appropriation of $140,547 if the school system is not awarded state grant money to build a new centrally-located high school from the Needs-Based Public School Capital Fund.

Northampton County Schools applied for this grant for a maximum total of $15 million last year but did not receive the money. The application to apply again this year is due in August.

The budget agreement also states the Board of Education will take necessary action in order to sell the former Seaboard-Coates school site.

Tyner motioned to ratify the agreement and Greene seconded. The vote was unanimously in favor.

Chairman Carter thanked Turner and her staff as well as both boards in working together to come to an agreement.

“We knew it was going to take both boards working together, having discussions, as opposed to just statements about the status of the school system,” Dr. Smith-Woofter said after the meeting adjourned. “We will be able to be more competitive in valuing our teachers.”

If you are looking for a way to celebrate the nation’s 242nd birthday, the Roanoke-Chowan area is the place to... read more