The five-alarm blaze was reported at 2:30 p.m. at a residence located at 202 South Main Street.

Winton Fire Chief Zack Askew said the homeowner was not at the residence when the call came in.

Realizing the need for manpower on a hot afternoon where the heat index was in the triple digits, Askew 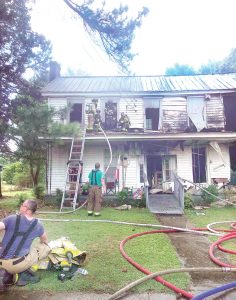 This photo show the combined effort of five departments that responded to a Sunday afternoon blaze at a Main Street residence in Winton. | Contributed Photo by Chris Smith

“As hot as it was, we were very fortunate to not have any of the firemen overcome from smoke or heat exhaustion,” Askew said.

Hertford County EMS was also at the scene performing rehab on the firefighters.

“They would check all our vital signs to make sure we medically safe,” Askew added.

He said the cause of the fire appears to have been electrical in nature.

“We believe it started at one of the electrical outlets in the living room…..that’s where the fire started,” Askew noted.

Askew stated that the last Winton unit left the fire scene at around 6 p.m.

WINTON – The Hertford County Board of Commissioners have selected one of the three options presented to them in March... read more