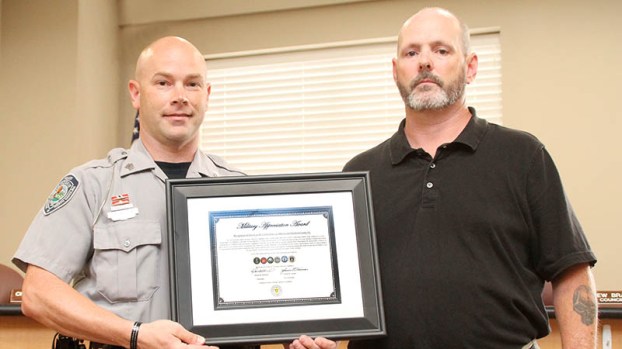 Ahoskie Police Sgt. Clifton Whitby (left), also a member of the Army National Guard, is the first-ever recipient of a Certificate of Appreciation awarded by the recently formed Hertford County Veterans Advisory Committee. Donald Kirkland (right), chairman of that Committee, made the presentation on June 26. | Staff Photo by Cal Bryant

Thanks for your service

Whitby’s regular job requires him dressing in law enforcement attire as he is a seven-year veteran of the Ahoskie Police Department, currently holding the rank of Sergeant, and serves the town and the local area as a highly trained K-9 Officer.

But there’s another uniform in Whitby’s wardrobe, that of a member of the Army National Guard for the past nine years where he also holds the rank of Sergeant.

It’s the latter position that earned Whitby some well-deserved recognition on Tuesday. There he was presented with the first-ever Certificate of Appreciation awarded by the recently formed Hertford County Veterans Advisory Committee.

Donald Kirkland, Chairman of that committee as well as a military veteran, presented Whitby with the framed certificate during a brief ceremony held inside the Ahoskie Town Council’s meeting room at the fire department.

“Sgt. Whitby has served his nation and his town honorably,” Kirkland stated. “We, the Veterans Advisory Committee, wish him Godspeed on any future deployments he will have as a member of the Army National Guard with hopes of his return to the Ahoskie Police Department.”

Kirkland said that some individuals believe that those serving in the National Guard are not worthy of recognition, saying they are just “weekend warriors.”

“It’s so different in this day and time; for the past 15 years the National Guard has performed the brunt of the work for the military,” he stressed. “They have been deployed overseas on numerous occasions to replace active duty personnel or in support of them. They also serve here stateside.”

In Whitby’s case, he has seen action in the Global War Against Terrorism – serving a stint in Afghanistan.

“He’s a good man and a good officer,” said Fitzhugh. “He came to us with a college education and furthered that education through his hard work by obtaining the highest level of certification in law enforcement in North Carolina, the Advanced Certificate. I thank him for his dedication to our department and thank him for serving our country as a member of the Army National Guard.”

Fitzhugh added that Whitby’s training as a K-9 officer has helped solve crime in Ahoskie and in other local jurisdictions where he has been summoned to offer assistance.

Hertford County Commissioner Johnnie Ray Farmer, vice chairman of the Veterans Advisory Committee and a retired U.S. Army Sgt. Major who served in Vietnam, said he fully understood the role that members of the Army National Guard play today across the globe.

“The National Guard/Army Reserve isn’t what is use to be,” Farmer noted. “Today, you guys have deployed many times to destinations all over the world. That takes a lot of dedication. For you, Sgt. Whitby, you are first and foremost a valued member of the Ahoskie Police. I admire our law enforcement officers as you put your lives on the line each and every day. And then when you deploy as a Guardsman, it’s the same thing all over again….putting your life on the line.

On behalf of the Veterans Advisory Committee, Kirkland offered thanks to Whitby’s wife and three sons.

“People don’t understand the sacrifice that families make while their loved one is serving his or her country, either here in the states or in a foreign land,” Kirkland stressed. “Those deployments can take someone away from their families or months or years at the time. The family back home may not hear from their loved one for weeks or months; they may be on special assignment and the family may not know if they’re alive or dead. That takes a toll; that places a tremendous amount of stress on a family.

“Please let your wife know that if she or your boys need anything while you’re deployed to please reach out to the Advisory Committee,” he added.

“I know how it is being away from your family,” Stephens remarked. “Be aware that there is a good support group here locally for you and your family. We’ve got your back.”

Kirkland noted that the Veterans Advisory Committee will be honoring other members of the military from Hertford County at a later date. He added the Committee is also working on other programs that will honor active duty and retired military personnel.

He thanked L&M Printing of Ahoskie for donating their time and material to print the certificates.

MURFREESBORO – During the June 4 meeting of the Hertford County Commissioners, the Board voted on a proposal from the... read more