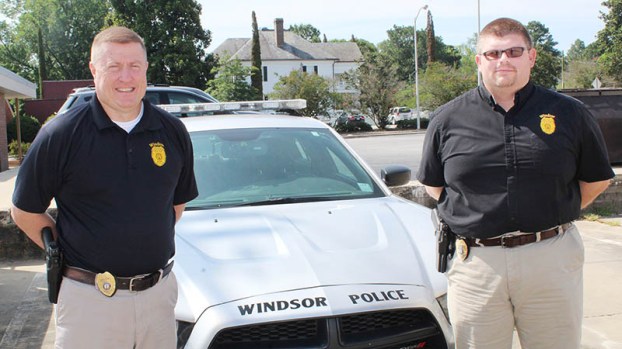 Standing beside one of the town’s police cruisers, retiring Windsor Police Chief Todd Lane (left) shares some final moments in office with his successor, Lt. Justin Jackson, who took over as chief on Friday at a swearing-in. | Staff Photos by Gene Motley

WINDSOR – With a law enforcement career spanning more than a quarter-century, Todd Lane, has been putting it all in the rear-view mirror of his police cruiser all this week and on Friday, June 29, when his successor is swore in, will quietly slip into retirement.

From time that began as a Kinston (NC) patrol officer thru two years of riding a beat in Wilson (NC) to over a quarter-century with the North Carolina State Highway Patrol, to finishing out his run as Chief of Police for the town of Windsor.

“The best thing about it is working with people,” Lane said on Thursday as he cleaned out the last few items in his locker. “The biggest word in law enforcement is ‘respect.’”

This marks Lane’s second retirement, having left the NCSHP in April, 2013 to accept the Windsor position. A graduate of the Coastal Plains Police Academy in Wilson in fall 1985, Lane then attended the 84th Highway Patrol Basic School in 1989, where he graduated with the highest average in his class.

He was named Senior Trooper in 1992 and Master Trooper three years later before becoming a Line Sergeant in February, 2004. He became a First Sergeant in May, 2008, five years before signing on with the Town of Windsor.

“He’s actually turned down a raise,” said Windsor Mayor Jim Hoggard, who said the Town Commissioners approved the bump in pay after Todd’s first year in office, but the veteran officer refused it.

“He’s been a great asset for the town,” Hoggard concluded.

“It’s a new role and a newer challenge than I’ve been used to,” Jackson said, seated at what was once his predecessor’s, and now is his own desk. “I’ll be working with the Town Manager, the Mayor and Town Commissioners, and hopefully doing what’s best for the town.”

Jackson said he hopes for a smooth transition to the top-cop job with the town.

“There’s a lot of stuff I’m used to doing and being from here I know the town pretty well and a lot of folks know me,” he added. “People are used to me and comfortable with me so they won’t have to get used to a new face. They’ve been seeing me for a long time.”

“When people are having their worst day and there’s something you can do to help folks is the greatest thing I’ve gotten out of being in law enforcement; just being a public servant. It’s what I signed up to do,” he reasoned.

Lane cited as one of his greatest assets his ability – strong ability – to communicate with the public. He seemed graciously modest, almost self-deprecating, as the hours of his last day in office ticked away.

“There are ways to handle people that don’t involve lock-ups,” he noted. “I’ve worked here in this small environment for quite some time now; so much so that there probably isn’t a business owner here in the town that I don’t know.”

Lane says he’s also proud of his extra-curricular activities away from the badge. He parlayed his passion for golf into innumerable rounds of the grand ol’ game with his daughter, Virginia – a former independent schools champion whom he coached when she attended Ridgecroft School before going on to play at first Mt. Olive and later Chowan University. He’s been a past president of the Windsor Rotary Club, serving on the board for the annual Windsor road racing event, the “5K Spook-tacular”. A known fitness buff, Lane also served as triathlon race director for the annual “Pound the Sound” swim-bike-run event at Merry Hill’s Scotch Hall Preserve.

“I’m grateful to the town, to (former Town Commissioner) Bobby Brown for bringing me here, and I appreciate everyone for their support during my time here,” Lane concluded.

WINDSOR – Two incumbents and one candidate hoping to make a return are the early filers for seats on the... read more