AHOSKIE – In a game suspended June 20 due to rain, Edenton Post 40’s senior American Legion baseball team managed to maintain a one-run lead all the way to victory when the game resumed Tuesday night back at Hertford County High School Field.

Ahoskie Post 102, seeking its second win of the season, fell by the score of 6-5.

Edenton was ahead 1-0 when torrential rains fell on the 20th, causing the game to be called after two complete innings.

Post 40 added three more runs in the top of the third inning to take a 4-0 lead after two-and-a-half.

Ahoskie scored their first run in the bottom of the third when Scoop Hoggard got a base-hit on an infield single, stole second base, and later third, before scoring on Ricky Neathery’s RBI groundout. Post 102 still trailed by three runs, 4-1, headed to the fourth. 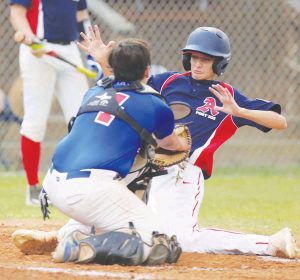 Ahoskie Post 102’s Ricky Neathery (right) is out at home plate attempting to score on a base-hit against Edenton in the resumption Tuesday night of a game suspended by rain last week. The out was costly for Ahoskie as Post 40 edged the home team for a 6-5 win. | William Anthony Photography

Post 40 scored its final run in the top of the seventh and carried a five-run lead, 6-1, into what might have been Ahoskie’s last chance at redemption.

Instead, Post 102 rose up and almost pulled out a win.

Frankie Reppy coaxed a one-out walk to place Ahoskie’s first runner on base. Hoggard then singled to left field to get two aboard. Justin Winslow was then hit by a pitch and Post 102 had the bases loaded with just one out.

Reppy scored when Neathery smacked an infield single to cut the Ahoskie deficit to four at 6-2. After a fly-ball catch reduced Post 102 down to its final out, Dallas Trevena ripped a two-out double into the gap in right-centerfield scoring Hoggard and Winslow and Ahoskie was suddenly within a pair of runs of tying up the contest and their fans were on their feet.

Neathery took off on the first pitch to the next batter, Ryan Rowe, whose infield shot was deep enough for him to beat it out for a base-hit and allow Neathery to score and make it a one-run game.

Ahoskie dug in, but their aggression might have backfired on them. Trevena, who was on third, took off and tried to score on a wild pitch that got away from the catcher. But the Edenton back-stop recovered, made the throw to his battery mate, the Post 40 pitcher, who applied the tag on Trevena for the final out, crushing Ahoskie’s chance to tie and possibly win.

Trent Munford, who got the original start, and lasted two-and-one-third of an inning, was saddled with the loss. Winslow pitched three and two-third innings, while Rowe pitched the seventh.

Ahoskie managed to do their damage on eight hits. Hoggard and Neathery had two hits apiece, while Trevena, Rowe, Gage Riddick, and Slade Cowan each had one hit for Post 102.

Edenton was led by Daquan Wilson, who was 3-for-4.