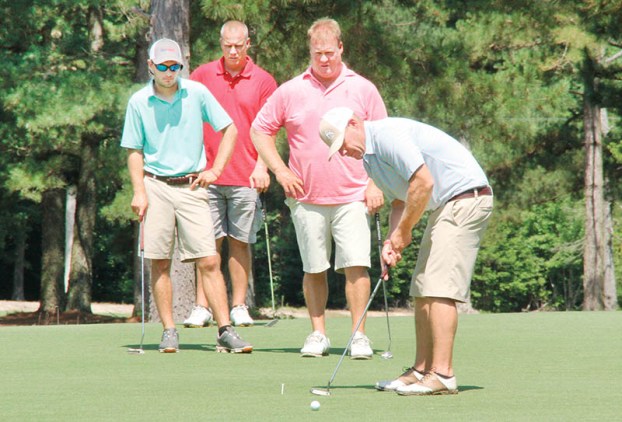 Members of a foursome sponsored by Mark Bryant watch as one of their teammates strokes a putt towards a hole at Valley Pine Country Club on Saturday, the site of the 15th annual Dr. Joe Fleetwood Golf Classic. | Staff Photos by Cal Bryant

LASKER – If Dr. Joe Fleetwood Jr. were alive today, chances are well above average that he would have flashed his trademark smile here this past Saturday.

However, Dr. Joe – as he was known far and wide – was smiling down from heaven.

The 15th annual Dr. Joe Fleetwood Golf Classic was held June 23 at Valley Pine Country Club. There, 16 teams (64 golfers) participated in the event, one that serves as the largest fundraiser to the Fleetwood Scholarship.

“Once again, the community came out and joined with our fine sponsors to stage this annual tournament,” said Phil Deloatch, president of the Conway Ruritan Club who hosts this fundraiser. “We greatly appreciate the support of those who participate, to include our sponsors.”

The tournament traces its roots to 2004.

“The town (Conway) and the (Conway Volunteer) fire department organized it and ran the tournament for the first few years before we got involved,” Deloatch stated. “It’s something we look forward to each year. It’s a great event and it pays honor to a great man.”

Dr. Joe was the featured attraction at the golf tournament that bore his name up until his death in October of 2013.

“At the steak dinner, which is a tradition at the tournament, Dr. Joe would have his meal interrupted as golfers and others would stop by and chat with him,” Deloatch recalled. “What a great man he was, always so kind. He would let his meal get cold on the plate as he always took the time to speak to everybody.”

As it was for many residents of the Conway area, Fleetwood served as the doctor for the Deloatch family.

“He took care of me and my family for several generations,” Deloatch said. “Plus he was a valuable member of our community, to include his membership in the Conway Ruritan Club.”

The Fleetwood Scholarship was established in 1999 at which time local citizens came together to honor Dr. Joe who had retired that same year. Their purpose was to remember Fleetwood’s service and compassion; a man that poured his heart and soul into the community for than 50 years.

Since 1999, the Dr. Joseph A. Fleetwood Scholarship Fund has awarded multiple scholarships annually to students who plan to pursue a college degree in a field related to medicine and who may return to serve Northampton County and its citizens.

“Our part in this is to raise some of the funds that support the scholarship,” Deloatch noted. “It’s something the Conway Ruritan Club plans to continue. We enjoy it and we thank the golfers, the community and our sponsors for allowing us to continue to raise funds for this scholarship.”

Winning teams from the 2018 event were as follows:

After graduating from Conway High School, Dr. Joseph Anderton Fleetwood, Jr. attended Wake Forest University where he began his studies in medicine and later graduated from Bowman-Gray University School of Medicine in 1947. After graduating, he entered the Navy, was commissioned as a Lieutenant J.G. and was assigned to the U.S. Naval Academy at Annapolis, MD as a base Physician. One of his last tours in the service 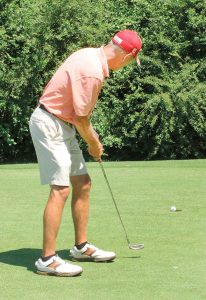 This member of the Hampton Farms foursome rolls in a birdie putt, which helped his team to a first-place finish in the Second Flight of the annual tournament.

was a mission called “Operation Deep Freeze” where he served as a personal physician to Admiral Richard E. Byrd of the U.S.S. Glacier that was deployed to Antarctica.

After returning and following his honorable discharge from the Navy, Dr. Joe settled back in his hometown of Conway, where he practiced Medicine with his father for a few years. After the passing of his father, he continued his medical practice to the community. He served the entire Roanoke Chowan area as a family physician for over 50 years of private medical practice.

Dr. Fleetwood was “one of a kind” because, day and night, he was there for his community, making house calls, providing care every day of the week at his personal medical practice in Conway. During his career he delivered over 3,000 babies throughout Northampton County and the surrounding counties of Eastern North Carolina.

On January 27, 1951 Dr. Joe married the love of his life, Cornelia “Pat” Poindexter Fleetwood. While helping their community, Dr. and Mrs. Fleetwood, Jr. began their lives together, raising four sons.

The Conway Community Scholarship Committee continues to raise funds to increase the endowment. Tax-deductible contributions to the fund are welcome and can be made at any time.

For additional information on the scholarship, contact the North Carolina Community Foundation office at 1-888-375-8114.

AHOSKIE – Property damage from Sunday evening’s severe weather in Ahoskie was not caused by a tornado. After studying photos... read more