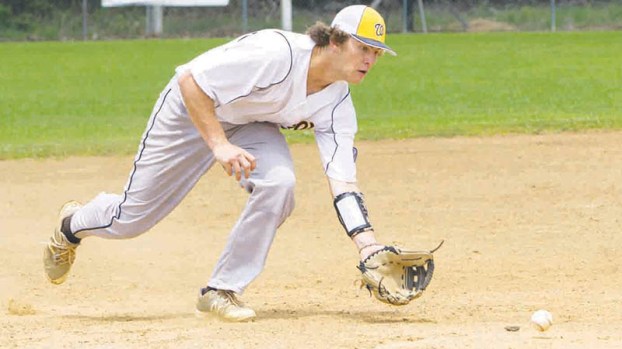 Windsor Post 37 junior American Legion baseball player Brandon Beach scoops a slow roller off the infield dirt in a previous game. Beach and the Rebels remained unbeaten after scoring a pair of wins this past weekend at Clayton Post 71 by scores of 17-7 and 14-4. | AA Imaging / Andre Alfred

Cameron Stevens drove in eight runs – six in the first game of the twin bill as the Rebels won 17-7. Then he added a couple more in the second contest, which Windsor also won by ten runs, 14-4.

The sweep kept Post 37 perfect on the junior Legion circuit as the final week of the regular season begins with a mark of 12-0.

In game-one, Windsor surrendered a run in the first inning and trailed 1-0 after one full inning.

In the top of the second, Jake Raynor opened with a base hit and later scored on an RBI single by Wood Trowell. Back-to-back sacrifice bunts followed to load the bases before Trowell scored on a Cameron Stevens groundout. Trenton White then doubled to left field scoring two more. Bryce Stevens, running for White, then scored the final run of the inning on an Alden Cottle RBI single. It was now 5-1, Windsor, before Clayton got a run in the bottom of the frame to trail by three, 5-2.

Stevens, Cottle, Brandon Beach, and Cody Stalls drove in runs in the top of the third and it was 9-2, Rebels after three complete.

Stevens was back at it in the fourth inning, this time getting an RBI double that scored Austin Scott. Stalls, Cottle, Beach, and Turner Griffin were also part of another five-run explosion that made it 14-2, Windsor at the end of three-and-a-half innings.

Clayton got a pair of runs in the fourth and three more in the fifth to halve their deficit to 14-7. But in the top of the seventh, Stevens smacked a bases-loaded double for the Rebels’ final three runs. Cottle came on in the bottom of the seventh and ended the game with a double play.

White led things off on the mound for Post 37 and got the win. He allowed three hits and two runs over three innings, striking out four and walking one.

Windsor totaled a whopping 21 hits in the game. White was 4-for-6, while Cottle was 4-for-5. Stevens was 3-for-6 with the six runs-batted-in. Beach also had three hits while Caleb Damo smacked a pair.

“I thought we showed a lot of toughness today,” said Rebels coach Bobby Harmon. “Anytime you play in this kind of heat you gotta be tough. Trenton threw the ball well and Wood was very good behind the plate. Offensively, I thought we were really good. We hit all the way through the line-up.”

In Game-two, Windsor broke open a tight contest with an eight-run outburst in the third inning on its way to a 14-4 victory to complete the doubleheader sweep. Griffin, Tayloe Powell, Cameron Stevens, Beach, Raynor, and Lane Slachta, all knocked in runs in the big inning.

The Rebels fired up the offense in the first inning when Cottle singled to drive in Stevens, and later scored on an error for a 2-0 Windsor start.

In the second inning, Bryce Stevens singled, was sacrificed to second, and scored on a two-base error for a 3-0 lead for Post 37.

Clayton got a pair of runs in the bottom of the second to make it a one-run game at 3-2.

In the top of the third, Windsor sent 14 batters to the plate, accounting for eight runs. Griffin started the onslaught with a bases-loaded walk for an RBI, before Powell walked for another run. Cameron Stevens drove in a run then scored on a wild pitch. Bryce Stevens got a sac fly, Raynor got an RBI, Griffin singled in the seventh run, and Slacta’s sixth walk of the inning was also good for a run.

Windsor closed out their scoring with their final three runs in the top of the fourth. Clayton got their last two in the bottom of the frame and the run-rule 10 run margin accounted for the quick (five innings) end to the nightcap.

Evan Wells got the win on the hill. He allowed a hit and two runs over three innings, striking out four and walking one.

The Rebels racked up ten hits in the game. Raynor and Cameron Stevens had two hits each while Cottle, Slacta, Damo, Griffin, Well, and Bryce Stevens had one hit apiece.

“Evan threw the ball really well,” said Harmon. “He kept the ball down and mixed it up. I love the way we swung the bats and ran the bases. We’ve just gotta keep doing what we do with a tough Perquimams team coming in Wednesday night.”

Windsor has three games at home this week, beginning tomorrow night (Wednesday) with that Perquimans game, then Edenton and Dare County on Thursday and Friday at Bertie High field. The Rebels then are at Wilson on July 1, and Bear Grass at home on July 2.

MANTEO – They only played nine-and-a-half innings of baseball this week, and along the way they scored 20 runs while... read more