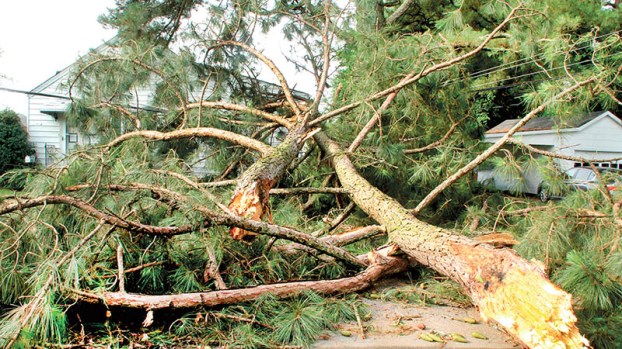 A pine tree covers a portion of Baker Street, near its intersection with Colony Street, on Monday morning. The tree also downed a power line in the background. | Staff Photos by Cal Bryant

The National Weather Service will make a determination sometimes this week of the exact severity of the storm, but according to local officials it does not appear to be tornadic activity.

“The storm has a distinguishable path, basically from NC 11 to the Ahoskie-Cofield Road, but it does not appear to have left any signs of a twisting action,” Smith said Monday afternoon. “However, there are a high number of trees down along one particular path.” 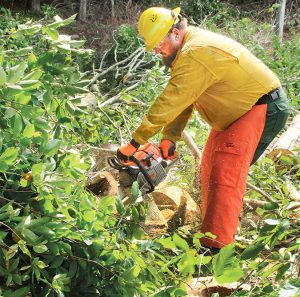 Members of the Hertford County office of the NC Forest Service were summoned to remove fallen trees and limbs along the outfield fence of the high school baseball field.

Smith said he took photographs. He sent those, along with his survey notes and maps, to the National Weather Service office in Wakefield, VA.

“From the material I sent, they will make a determination if the damage was caused by a tornado or from straight-line winds,” Smith stated.

By definition, straight-line winds are common with the gust front of a thunderstorm or originate with a downburst from a thunderstorm. These events can cause considerable damage, even in the absence of a tornado.

Yvonne Cashion, who resides on North Colony Street, one of the hardest-hit areas in Ahoskie, said she did not hear the tell-tale roar of a tornado, which is often described as sounding like a passing freight train.

“It hit around 8 to 8:30 (p.m.),” said Cashion while perched on the front stoop of her home Monday morning, sipping a soft drink and seeking some heat relief as the electricity was still off due to a fallen pine tree across a nearby power line.

“I was watching TV and saw the severe thunderstorm warnings scroll at the bottom (of the screen),” Cashion continued. “Then I heard a loud noise at that end of the house (pointing north); then a loud noise at the other end. The lights flickered, and then went totally off. There was a lot of wind, heavy rain and lightning, but I didn’t hear anything that sounded like a tornado.”

There were some reports of moderate damage.

Across the street from Cashion, a tree limb damaged the roof of a residence.

A tree fell on a power line, resulting in the power pole falling on the roof of a home on North Mitchell Street.

There was a house fire on Hill Street shortly after the storm passed by. The fire, electrical in nature, was contained to underneath the home.

The visitor’s dugout at the Hertford County High School softball field was destroyed. The centerfield fence at the HCHS baseball field was damaged by a fallen tree. Luckily, that tree narrowly missed the scoreboard at that facility.

“Fortunately, there were no reported injuries,” said Smith. 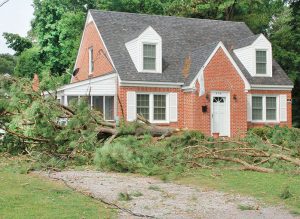 A fallen pine tree narrowly missed impacting this home on Holloman Avenue. For additional photos from the storm’s impact, see page 3 of today’s edition and the R-C News-Herald’s Facebook page.

“We were called out on multiple occasions Sunday evening,” Bradley said, adding that many of those calls were for electrical transformers exploding, and to block off streets impacted by downed power lines.

Those downed lines were reported in various areas of Hertford County as well as Ahoskie. Smith said as of 2 a.m. Monday, Dominion Power and Roanoke Electric Cooperative had a combined 3,500 outages.

“They were going at it hard Sunday night and well into Monday,” Smith said of the power companies making repairs.

“Our citizens were out on Monday helping one another out,” said Ahoskie Police Chief Troy Fitzhugh.

He added that his officers were out on Sunday night, manning the intersections at Academy Street and First Street, and Academy and Hertford County High School Road.

“The power was off; it was pitch black from First Street all the way past Bojangles and those stoplights were not working,” Fitzhugh noted. “We stationed our patrol cars there to help with traffic safety. Later into the night we patrolled all those areas where the electricity was still off.”

Fitzhugh thanked deputies with the Hertford County Sheriff’s Office who assisted his officers.