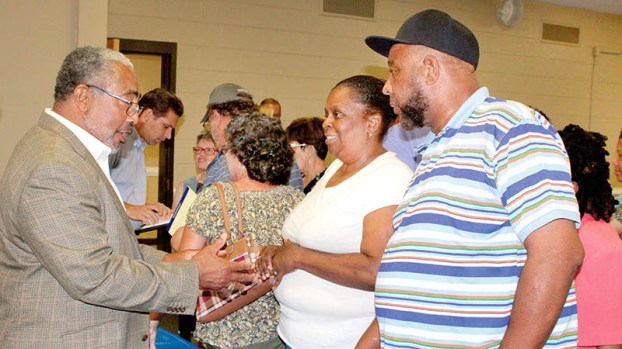 Bertie County Commissioners vice-chairman Ron Wesson explains to county residents the funding available from the MidEast Commission for home repairs to citizens affected by Tropical Storm Julia and Hurricane Matthew from 2016. This was part of a town hall meeting Commissioners held in Windsor this week to update residents impacted by the storm and who are still seeking relief. | Staff Photos by Gene Motley

A group of nearly 50 persons attended, and many are still awaiting funds they have applied for and would be applicable to either a buyout/elevation, or repairs.

In total, more than 150 homes and 29 businesses were affected by the two storms which hit the local area less than two weeks apart in late September and early October, 2016.

Some residents have been flooded four times in the last two decades. Still others have relocated and businesses have been closed, yet to reopen.

They all came with one question: Where’s the money they’ve heard has come from the state and federal level, but has not yet reached them? 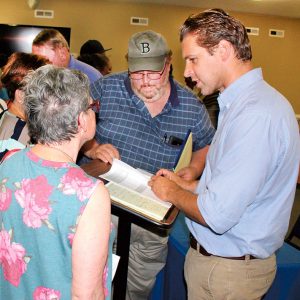 Chris Hilbert of Holland Planning & Consulting answers questions and checks lists for residents at the town hall meeting. Though $7 million in grant monies has been approved for Bertie County for 2016 storm relief, many residents have yet to receive those funds.

“We want you to ask the necessary questions, and to tell us about your flood issue,” Bazemore stated, opening the proceedings.

Hilbert was also there to answer questions about the various options many had applied for, and to sort out where exactly was the funding that is expected to be received from the state and federal government.

Hilbert reminded most that they were already in the buyout/elevation process, but that process has been delayed for various reasons.

“FEMA hasn’t released it to the state, and the state hasn’t sent a grant agreement with the municipalities,” Hilbert explained. “There’s nothing I can do personally about that, but I will work with you to administer this program.”

Hilbert said the buy-outs have been approved, and they’re just waiting for FEMA to sign off on them. Thirty-four homes have been approved. He said in addition to updating those already approved, he wanted to give information for those who qualified, but weren’t on the list.

The most important factor to maintain in the buyout program is the homeowner’s receipts.

“If you spent any money from flood insurance, or any FEMA money, you need to start getting that stuff together now,” he cautioned. “If you don’t have receipts, they’re expecting you to have the money. Whatever you spent money on, you must disclose to the program.”

Hilbert said homes are appraised at full market value at the time of the storm, and they are taken in the order they were received.

“It’s going to take a while,” he stressed. “During (Hurricane) Floyd, some homeowners had to wait a couple of years before the buyouts came through.”

Hindering the efficiency at which payments could be made, Hilbert said, was that Matthew was a multi-county storm event as opposed to Floyd.

Trent interjected that with some $7 million out of $11 million approved for Bertie County, when were the home and business owners that are still waiting going to get their money. He declared the slow process has been confusing to residents. “People here are trying to figure out when they are going to get their money,” he asserted. “There’s no reason that federal money going through the state should take five years, and we can’t get any answers from the state, not because of you, but we need to know what is happening at the state and federal level.”

Hilbert said the chain of action had just not reached him yet.

“(Your letter) is in the FEMA office in Atlanta, and I’m waiting for it to be sent to Raleigh, who’ll then draw up a grant agreement and sent it to your local board.”

“So we’re talking another 12 months,” inquired one homeowner.

“Maybe,” he answered. “In the case of buyouts, we’re trying to get money into your hands as fast as we can.”

Betty Jo Shepheard, regional representative for U.S. Senator Richard Burr, and Trey Lewis with Senator Thom Tillis’ office also attended. Shepheard said the money from the federal government is authorized and is in North Carolina, but it has not been approved by FEMA at the environmental level.

Wesson said Bertie and Windsor weren’t the only communities affected; Edgecombe County (Princeville) was also in a delay. He also told the group that there is money from the MidEast Commission available, but it does have income eligibility.

“This is a separate pool of money, only for homes that have to be repaired – not buyouts or elevations,” he stated. “The limit is $14,000, and it can take care of smaller issues, things like replacing insulation and water under the house. And the process is much faster because the money is a grant and it’s already there.”

Wesson said 80 percent of Bertie’s residents affected, as such, would qualify for this money.

“In any case, make sure you are on the list so we can get you to the right place and get you qualified,” he implored. “It may take some time, but if you don’t apply, you can’t get anything.”

Citizen outcry still came from the floor, questioning where the money was. Hilbert said $4.2 million had been approved, but not yet released to be dispersed to homeowners.

Hilbert said 11 houses had been approved for elevation, and that those homes have been repaired to the tune of $1.7 million.

“We also have the Disaster Assistance Recovery Grant,” he added. “And we have received 22 applications for that.”

He said the town of Windsor had received $1 million for a neighborhood revitalization project.

“What this money is going to do is for people who applied for buyouts but did not get approved,” he added. “We’re hoping to also assist those persons by getting them into a CDBG (Community Development Block Grant) program that would help them with relocation and new construction.”

Bertie County Emergency Services Director Mitch Cooper told the assembly the state Office of Emergency Management has opened ReBuild NC Housing Application centers in four counties, and four more are scheduled to be opened later this month, including one in Bertie at the former CADA office on South King Street. Cooper did warn this was preliminary and not yet confirmed as being certain to happen.

“When this is set up we want everybody who’s not on a list tonight to go to that office,” advised Hilbert. “It’s going to document any unmet needs.”

“This meeting has been beneficial because we haven’t been able to reach out to all of you.” he admitted. “What I want to leave you with tonight is your knowing which list you’re on and if you’re on a list, that you can at least feel secure in that. We want to tell you where you can go.”

Bertie County manager Scott Sauer distributed copies of a paper showing, among other things, a timeline of what government has been doing to assist property owners, dating back to the fall of 2016; also the original list, by address, of applications. He also encouraged homeowners who had not yet done so to get on a list for assistance.

Moving toward closing, Commissioner Lee requested the senators’ aides take back to Burr and Tillis and the state Congressional delegation the need to keep everyone informed on when the environmental approval from FEMA comes through so the approved federal funds for Bertie can be released.

Stewart White said everyone in county government had been proactive in working for solutions to the issues.

Bazemore concluded the meeting by thanking those who attended and complimented the exchange of dialogue.

“We wanted to hear your concerns, and we wanted you to hear what we knew,” she said. “Hopefully from tonight we can take care of some of these issues.”