MANTEO – They only played nine-and-a-half innings of baseball this week, and along the way they scored 20 runs while surrendering just two, but it was enough work to keep the Windsor Post 37 junior American Legion baseball team unbeaten and in first-place in the Area-One East race.

Working to avoid a rainout, and with squalls moving in offshore, the Rebels made quick work of Dare County Post 26, 12-0, in just two-and-a-half innings in a run-ruled affair.

Wood Trowell started for Windsor and only went two innings to earn the victory, allowing no runs and no hits while striking out a pair.

“This was the best I’ve seen Wood all year,” said Rebels coach Bobby Harmon. “Really, really good mechanics, located to both sides of the plate and we played great defense. I challenged them before the game to be aggressive right from the start and my guys really responded.” 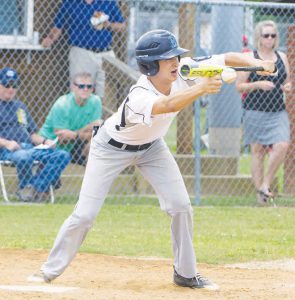 Windsor’s Turner Griffin keeps his eye on the ball to lay down a perfect sacrifice bunt in an earlier junior American Legion baseball game. Griffin and the Post-37 Rebels won their 10th game against no defeats when they blanked Dare County in Manteo on Thursday, 12-0. | AA Imaging / Andre Alfred

runners aboard. Alden Cottle was then hit by a pitch to load the bases. Jake Raynor then lifted a deep sacrifice fly to right field that scored Stevens. The next batter, Caleb Damo, smacked a single to left that scored White, and Cottle came in on s base-hit by Austin Scott. Trowell later reached on a fielder’s choice which scored Damo. Windsor led it 4-0 after just a half-inning of baseball.

After the Hammerheads went down in order, Windsor opened the second inning with Cody Stalls drawing a base-on-balls. White then smashed a long one-out line drive into the gap in right centerfield for a double that scored Stalls. Cottle then got a base-hit to put runners on the corners, but White later scored on a wild pitch. The Rebels only picked up two runs, but it increased their lead to 6-0 after an inning and a half.

The Hammerheads had their first base-runner that reached on an error in the bottom of the second, but he was quickly erased on a 6-4-3 double play. The next batter walked, but a fly-out ended the inning and Dare County remained in a six-run hole.

With the skies threatening, Windsor needed only four more runs to complete the game before the rains came. They would get six.

Back-to-back singles by Trowell and Turner Griffin got two runners on base to open the third for Windsor. Cameron Stevens then scored both with a deep double with one-out to right field, but Stevens was out trying to stretch it into a triple, for two-down. White then reached on an error, Cottle singled, and Raynor was hit by a pitch to load the bases. Damo then got his first extra-base hit of the night with a deep double to centerfield, clearing the bases as a light drizzle began to fall. Scott then singled to score Damo with the game’s 12th run, but by then lighting was seen on the horizon and the umpires declared it a run-ruled game after just two and a half innings and brought the players in off the field. The two teams will play the regular-season finale in Windsor on June 29, but the coaches opted to make this one count since it was a league contest.

Windsor finished with 10 hits. Scott and Damo were both 2-for-3 with Damo driving in four runs. Cottle was 2-for-2. Stevens, White, Trowell, and Turner Griffin had the other hits for Windsor.

“We hit the ball hard and ran the bases,” said Harmon. “Now it’s on to Clayton.”

Windsor kept on rolling, posting their 10th win of the season and ninth straight win in Area-One conference play. The Rebels now hit the road for their next-to-last away game of the regular-season when they meet Clayton Post 71 in a doubleheader at Corinth Holders High School, the first game being a conference contest, beginning at 2 p.m.

Windsor comes off that twin bill with three games in three days next week, all at home, and all at 7 p.m. They will open Wednesday with Perquimans, then close against Albemarle and Dare County on Thursday and Friday, respectively. They close the season on the road July 1 at Wilson Post 13.