Windsor opened the scoring with four runs in the bottom of the first inning.

Cameron Stevens walked and scored on Cody Stalls’ RBI triple that sailed over the head of the Edenton centerfielder. After winding up on the hot-corner, Stalls scored later on a wild pitch. Trenton White then walked and later scored on an error. The Edenton pitcher had trouble finding the strike-zone and Caleb Damo would draw the third base-on-balls of the inning. Damo would be the second runner to score on a wild pitch and the Rebels had staked themselves to an early 4-0 lead in just the first inning before many of their fans could get situated in their seats. 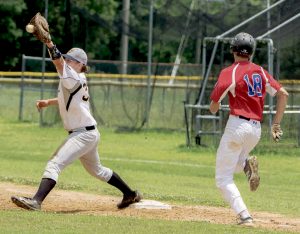 There’d be plenty more, however, for Windsor fans to cheer about, as the Rebels added three more runs in the bottom of the third. Wood Trowell smacked a two-run double, and he came in to score on Turner Griffin’s RBI double to nearly the same spot in the outfield. Windsor led the game 7-0 after three innings of baseball.

Windsor claimed its final run in the bottom of the fifth as Trowell got his third RBI, this time on a sacrifice fly. Windsor led it 8-0 through five innings.

Edenton did not go quietly into the Bertie County night. Post 40 got a pair of runs in the top of the seventh inning and that made for the six-run final score as Windsor’s domination of the Area-One standings continued.

Alden Cottle pitched four innings for the win allowing no runs on one hit and he added four strikeouts. Jarrett Burden, Stevens, Tayloe Powell, and Stalls also saw action on the hill, surrendering a pair of runs on a pair of hits between them.

“All of our pitchers threw the ball well,” said Windsor coach Bobby Harmon. “One of the big keys in the game tonight was that we ran the bases really well. We played good defense and this was a good win.

Windsor raises its record to 9-0 and picked up their eighth win in Area-One juniors conference play (8-0). The Rebels are back in action tonight (Thursday) on the road against Dare County in Manteo at 7 p.m.