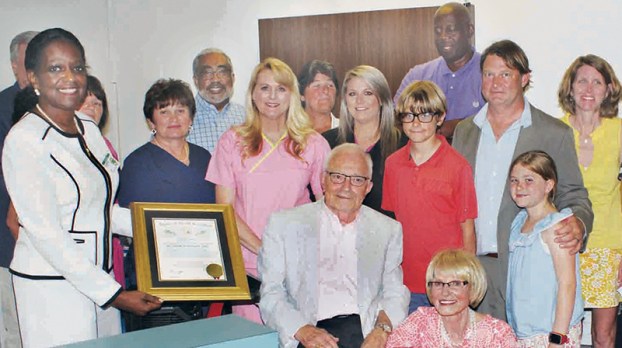 WINDSOR – It’s one of the highest and most prestigious honors a North Carolina citizen can receive. Among the recipients: Billy Graham, Andy Griffin, Dale Earnhardt, Maya Angelou, and Catfish Hunter.

The Order of the Long Leaf Pine, originated under the administration of then-governor Terry Sanford back in the 1960’s, has now been given to well over 1,000 honorees. Sanford wanted to bestow on citizens of the Old North State an honor similar to the honorary title of “Kentucky Colonel”, as they have in the Bluegrass State and other like recognitions by states all across America.

In January, a Bertie County icon received word of the accolade, and it was formally presented at the June 4 meeting of the Bertie County Commissioners.

Dr. Wayne P. Attkisson, who has served Bertie as a Windsor-based dentist for more than half-century, was awarded the high civilian honor bestowed by Governor Roy Cooper.

Attkisson, who retired in February of this year, was feted not only by the Commissioners, but by staff members of his former practice, as well as his successor, Dr. Jonathan Hairr. Also present were local Windsor residents and many family members and friends.

“It is given to those who have a proven record of extraordinary service to the state,” read Commissioners chairman Ernestine Bazemore, as the framed, gilded certificate glowed on the Commissioners’ desk. “On behalf of Bertie County we want to thank you for all the teeth you’ve saved, and for all the ones you’ve pulled.”

As Attkisson’s name was called, thunderous applause arose from family and friends who’d packed the Commissioner’s Room for the brief ceremony.

“This citation reads, ‘Reposing special confidence in the integrity, learning, and zeal of Dr. Wayne P. Attkisson, I do present the Order of the Longleaf Pine, with the rank of Ambassador Extraordinaire,’ and it’s signed by the Governor,” Bazemore declared. 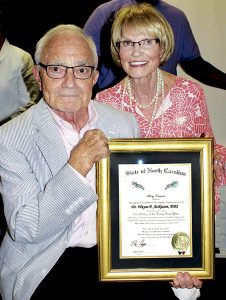 Dr. Attkisson and wife Margaret (right) pose with the state’s highest civilian honor awarded to the retired dentist by Governor Roy Cooper back in January and presented at the ceremony in June. Staff Photo by Gene Motley

“When you get the Governor’s award you can talk as long as you want,” quipped Commissioner John Trent.

In additions to words of gratitude and graciousness to family and friends who had been with him since he first moved to Windsor, Attkisson recounted his journey: a native of Kinston who survived polio as a young child, he graduated from dental school, and then spent time in the U.S. Air Force stationed in the nation’s capital until he and wife, Margaret, settled in Bertie County.

“When I was in dental school, I borrowed money which required me to practice in a small town, and I looked all over the state, and I just loved the water around here,” Attkisson said. “I got out of (the service) on a Friday afternoon, and on Monday I started my practice; and this has been a wonderful opportunity for my family and my practice.”

Attkisson said when he began at his small office on Windsor’s Sterlingworth Street; he wanted to bring quality, above average dentistry to the region.

Calling his dental assistants by name – many of whom had been with him for over 40 years – he saluted their loyalty and fidelity.

“We’ve had a little change,” he joked. “One assistant finally quit because she didn’t think I was going to retire. After all, my dad lived into his nineties and at 95 he probably could have still done it.”

Hairr has assumed the practice since Attkisson’s retirement and even he didn’t escape a few jovial barbs from his predecessor.

“Patients love him and my staff wanted to stay with him,” he wisecracked. “Usually when you change like that people want to disappear, but they all wanted to stay and we’re fortunate to have him.”

Attkisson also saluted the town of Windsor and Bertie County for its durability.

“After living in Windsor for 50 years you never know what kind of natural disaster is going to hit,” he cracked in jest. “What is amazing is how you’ve continued to bounce back. We still survive, and I’m very proud of that. People have been so good to me. It’s sad sometimes to see some things (businesses) disappear, but thank God for Perdue, because they figured we all have to eat.”

In addition to his dental practice, Attkisson, the entrepreneur, was part of a group that built the 30-plus FHA housing units located just off King Street, as well as the Windsor Commons out on the Windsor bypass.

“It’s all been so good to me, but it’s the people here who’ve been the best to me and my family,” he said. “I appreciate you all.”

“You make out with what you’re dealt in life,” he assured, “and this has been a good life for me.”

Perhaps Attkisson’s greatest legacy is in the words inscribed on the citation, the words of a 1908 toast by author Lenora M. Martin:

“Here’s to the land of the longleaf pine,

The summerland where the sun doth shine.

Where the weak grow strong, and the strong grow great,

Here’s to ‘down home’, the Old North State.”