This past Sunday, Robinson’s name was removed from that listing. 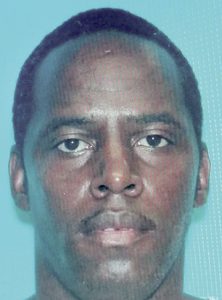 Taylor said Robinson was arrested on June 17 at his residence – 117 David Drive in Kelford – on outstanding criminal warrants involving felony breaking and entering, and felony larceny at a Rich Square business on April 13.

She added the arrest was made by Bertie Sheriff’s Deputy Jonathan Price.

“Mr. Robinson did attempt to flee, but was apprehended and taken before the Magistrate where he was placed on $20,000 secured bond and placed in the Bertie/Martin Regional Jail,” Taylor said.

Robinson is scheduled to make a first appearance on June 28 in Northampton County Criminal District Court to answer the charges for which he stands accused. Those charges also include possession of stolen goods, injury to property, and resisting a public officer.

All charges stem from a break-in that occurred shortly before 1 a.m. on April 13 at Duck Thru Convenience Store #7, located at 224 North Main Street, Rich Square. There, an individual entered the business, which had closed for the night, and stole lottery tickets, cigarettes and beer.

Taylor said after viewing the store’s surveillance footage she was able to identify the suspect as Marvin Robinson.

“I stopped to place Marvin Robinson under arrest for the Duck Thru break-in and larceny at which time he led me on a foot chase into a wooded area and avoided arrest at that time,” Taylor stated.

She added that Robinson is also a person of interest in other break-ins in Rich Square over the past several months.

RICH SQUARE – A trio of men from Rich Square stand charged following the break-in and larceny of a home... read more