Chesapeake (VA) was the first opponent in a non-conference game for Post 102’s home opener last Saturday (June 16); but Ahoskie could not scratch out a win.

Post 280 swept Ahoskie in a double header by scores of 11-0 and 10-3, spoiling their debut before their home fans.

Chesapeake got on the board first with a pair of runs in the top of the first inning and led it 2-0 after the first full inning.

Post 280 got another run in the top of the third inning and six more runs in the fourth to lead it 9-0 after three-and-a-half innings of baseball. 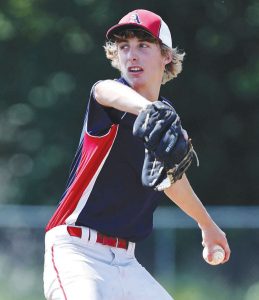 Ahoskie threatened in the bottom of the fourth when, with one out, Ricky Neathery walked and Gage Riddick singled. Both runners moved up a base on Dallas Trevena’s groundout. However, just 90 feet away from scoring, a fly ball out ended their chance and they remained nine runs down after four complete.

Chesapeake scored another pair of runs in the top of the sixth inning to give them the run-ruled win and end the game.

Edward Bradley went three-and-two-thirds innings and took the loss. Ryan Rowe came on and pitched in relief for Post 102.

Justin Winslow and Riddick had the only hits (two) for Ahoskie.

Chesapeake also took the second game to complete the sweep.

The Pelicans scored a run in the top of the first for a 1-0 lead after one.

Ahoskie scored three runs in the bottom of the third. Neathery doubled and Gage Riddick walked to get a couple of runners on base just before Trevena smacked a three-run home run over the left field fence to give Post 102 the lead, 3-1, after three innings of baseball.

Chesapeake tied the game with a pair of runs in the top of the fourth to make it a 3-3- contest after four innings.

Post 280 then exploded for seven runs in the top of the fifth before Ahoskie’s final chance came in the bottom of the frame. Instead of a rally, it ended with a strikeout for a 10-3 Chesapeake win.