Ahoskie got on the scoreboard first with a run in the top of the first inning. Tyrek Beverly reached and scored later on an error to put the Braves in front 1-0 after one full inning of baseball.

Windsor waited until the bottom of the second to light things up. And they opened things up with a little ‘small-ball’: three straight run-scoring singles. Jarrett Burden drove in the first run with an RBI single and Cameron Stevens got the second – also with an RBI base-hit, right before Trenton White did the same for the Rebels’ first three runs.

The scoring continued as Alden Cottle was hit by a pitch with the bases loaded for another run-batted-in. 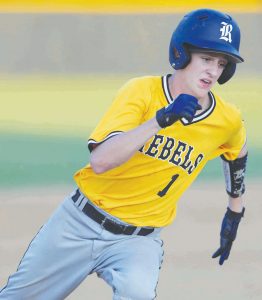 Windsor’s Austin Scott digs for home on a base hit in Wednesday’s junior American Legion baseball game with Ahoskie Post 102. Scott scored twice, drove in a run, and pitched in middle relief as the Rebels topped the Braves 10-3 to remain unbeaten in Area-One junior’s play. | William Anthony Photography

Caleb Damo then delivered a two-run single followed by another run crossing the plate off the bat of Wood Trowell. With seven runs now on the board Post 37 finished the inning with Turner Griffin driving in another pair of runs with a base hit. When the smoke cleared, the Rebels led it 9-1.

Ahoskie got its last two runs in the top of the third on a Trent Hobbs RBI double and a Steven Futrell RBI single. Windsor still was in front by six runs, 9-3 after three complete.

The Rebels’ final run came in the bottom of the sixth inning on an Austin Scott RBI single that made it 10-3 after six.

Ahoskie failed to score in the top of the seventh and the Rebels had made it a season sweep with wins over the Braves in both games this season.

Windsor got their 10 runs on 10 hits with Trenton White leading the way with three hits. Damo had a pair of hits and Cameron Stevens, Austin Scott, Wood Trowell, Turner Griffin and Jarrett Burden had one hit each.

Ahoskie had five hits. Tyrek Beverly and Trent Hobbs had two hits apiece and Steven Futrell had the other.

“It took a couple of innings to wake us up,” said Windsor coach Bobby Harmon. “We had that big second inning and that was it. Ahoskie’s a good team but we took advantage of their mistakes because that’s what a good team does.”

Windsor is now 8-0 and 7-0 in Area-One juniors’ Legion competition. Following the Ahoskie win, the Rebels blanked the Albemarle Wildcats 13-0 on Thursday in Elizabeth City. Sunday they will host Wake Forest in a double-header at home on the Bertie High field beginning at 4 p.m.

Ahoskie falls to 8-3 overall and 4-2 in league play. The Braves will visit Wilson Post 13 for a double-header today (Saturday) at Beddingfield High School beginning at 2 p.m. Monday they will visit Bear Grass for a non-conference game set for 7 p.m.