AHOSKIE – Don’t be alarmed if you see a North Carolina-Virginia (NCVA) Railroad Company train traveling at a higher rate of speed than normal.

As of Monday, June 11, those trains will increase their speed from 10 mph to 25 mph in certain portions of Bertie and Hertford counties.

Su Son, Trainmaster for NCVA, said the speed of the trains was increased due to a major renovation project on the 52-mile line, which snakes across Hertford, Bertie and Northampton counties from the Nucor Steel plant to the main CSX rail line in Boykins, VA.

While that project is still ongoing, the portions of the track where the renovations are complete will allow for speeds greater than 10 mph. Those areas (and speeds) include the following: 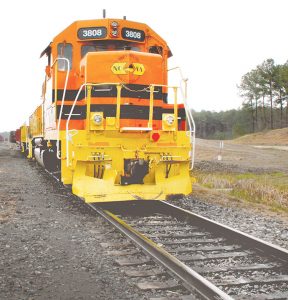 25 mph – from the Commerce Street (NC 305) crossing in Aulander to the US 13 overpass (Memorial Drive) in Ahoskie. That includes the crossings at NC 11 and Brickmill Road, both near Aulander, Early’s Station Road, and Johnny Mitchell Road;

25 mph – from Hall Siding Road to the crossing at the Perdue Farms Grain facility near Cofield. That includes crossings at Saluda Hall Road, Blue Foot Road, and NC 45.

“Even though we can operate at 20 mph, our trains will slow down significantly, slower than 20 mph, within the town of Ahoskie,” Su Son said.

As for the other sections of the line, the train speeds will remain at 10 mph from the Commerce Street crossing in Aulander to Boykins, VA. This area includes all of Northampton County.

Renovations to NCVA is a $11.6 million project, which was announced in December of 2016. The North Carolina Department of Transportation secured half of the funding through a federal grant from the Transportation Investment Generating Economic Recovery program. The balance of the cost is covered by an investment of $3 million from NCVA and $2.8 million of state funds.

In addition to increasing speeds of the trains, the project also strengthened the rails, allowing NCVA to increase the maximum weight capacity on its rail cars from 270,000 to 286,000 pounds.

The project included 17 miles of new rail, 10,000 new rail ties, and upgrades of 12 rail bridges in order to handle the increased weight capacity on the rail cars.