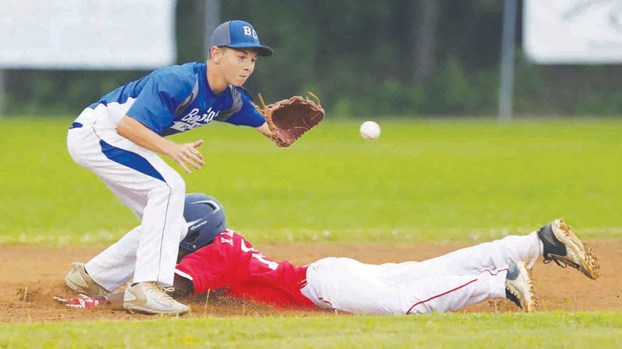 Ahoskie’s Keyshawn Lassiter (right, in red) slides into second base ahead of the Bear Grass tag in Monday’s junior American Legion baseball game at Hertford County High Field. The Braves won their fourth in a row with a 9-8 walk off over the Bears. | William Anthony Photography

AHOSKIE – Ahoskie scored the winning run in the bottom of the tenth inning here Monday evening as Bear Grass committed an error, producing a walk off 9-8 victory for the Braves in junior American Legion baseball action.

Ahoskie opened the scoring with a run in the bottom of the second inning. Parker Bradley singled to left field. Pinch-runner Keyshawn Lassiter was then subbed in for Bradley and stole second base. Lassiter then scored when Avery Harris reached on an error and Ahoskie was ahead 1-0 after two complete.

Post 131 continued pouring on the offense, adding four more runs in the top of the fifth and building a 7-1 lead headed to the bottom of the inning.

But Ahoskie answered with an explosion of their own, scoring six runs in the bottom of the frame. Alden Lassiter and Trent Hobbs opened with a pair of walks before Lassiter scored on a Steven Futrell RBI single to right field. Bradley was then hit by a pitch to load the bases and pinch-runner Derious Boone, in for Hobbs, scored on a groundout by Logan Early. Futrell scored on a wild pitch before Hunter Mitchell walked, then stole second. Keyshawn Lassiter, pinch-running for Bradley scored along with Mitchell on a T.J. Lassiter two-run single to centerfield. Zack Lassiter then ran for T.J. Lassiter, who’d taken second base on the throw from the previous play. Zack Lassiter then went to third on a wild pitch. Harris walked to put runners on the corners, but when coach David Ellis tried to execute the double-steal, Harris was out, but Zack Lassiter scored, tying the game at 7-all at the end of five.

It remained that same score through the regulation seven innings as neither team was able to score.

Bear Grass finally broke through with a run in the top of the eighth inning to claim an 8-7 advantage going into the bottom of the inning.

Ahoskie prevented an early exit by the visitors and the fans with a run in their half of the eighth. With two out, Hobbs singled to centerfield and scored on a Futrell RBI double to right field. The Braves could only get one across and it remained knotted at 8-8 on into the bottom of the tenth inning.

There, Ahoskie scored the winning run when Tyrek Beverly smacked an infield single and stole second base. Advancing on to third base on a wild pitch, Beverly came home when Hobbs reached first base on an error and Post 102 had their walk off win.

Mitchell pitched three-and-two-thirds innings, Hobbs went six innings, and Harris got the last out in the top of the tenth to get the win.

Post 102 had nine hits as Beverly, Hobbs, Futrell and Bradley collected two hits each and T.J. Lassiter had the other safety.

“A big conference win for us and another comeback win,” said an elated Ahoskie coach David Ellis. “Trent pitched very well for us and Avery got the win in relief. We also got some key hits when we needed them for this win.”

Ahoskie raises its record to 8-2 after winning their fourth in a row. They are also 4-1 in conference and played at Windsor last night (Wednesday) in a game that was not completed by press-time. They will play a doubleheader against Wilson at Beddingfield High School on Saturday beginning at 2 p.m. and then play the return gamer with Bear Grass at their place next Monday at 7 p.m.