Worshipping together after 133 years apart

Prior to the formation of the Roanoke Missionary Baptist Association in 1866, Free-Born African American men like Lemuel Washington Boon, J. T. Reynolds, Charles E. Hodges, Willis Hodges, William Reid, and Willis Arterbridge were cringing from the sights and the groans of the “chast’ning” rod felt in the days of their youth. These men met in secrecy at a time when hope unborn had died in order to formulate an association of their own to include all of the tightly knitted churches of the Free People of Color.

These free men of color were long since tired of having to worship in the balcony of white churches, tired of having to be chaperoned by a white man, tired of having to hear a preacher whose only message was “obey your masters for this is right in the sight of God! These men yearn for a kind of association that would rekindle their divinity, rather than an association in a white church where they were required to sit in the “Black Pews” or in the balconies, while being viewed from afar as God’s rejects fit only for the atrocities and the indignities of the damned. 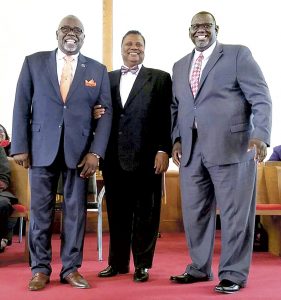 These free men of color came from the listening mountains of North Carolina to the rolling rivers and sandy beaches of Roanoke Island, to the Old Dominion cities and boroughs of Fentress, Norfolk, St. Brides, Princess Ann County, Whaleyville and points beyond because they men were simply sick and tired of being tired.

It may be an unproven truth; they heeded the presumed call of Reverend Lemuel Washington Boon and convened on Roanoke Island to solidify their long years of work of association building. They may never know the hours of toil spend in privacy and secrecy formulation the plans for the association. However, they can be sure that Roanoke Island, North Carolina, the home of the Freedmen was selected as a testament to their resilience.

After the formation of the Roanoke Missionary Baptist Association the founding fathers donned their long tail dusters, black beaver hats, and a satchel containing a Bible and a hymn book and traveled the long winding roads and muddy streams preaching the gospel of love to men who had been robbed by slavery of himself and made the property of another. Slavery had robbed the Negro of his own body which was no longer his own. All that made it, and all that dwelled in it, was claimed, held, used, brought, and sold as another’s.

The founding fathers governed the infant association as a mother nursing her young. They actively participated in the monthly activities of the rural association with churches from Manteo to Northampton County, North Carolina, and from Robersonville, North Carolina to Princess Ann County, Virginia. There were no dissentions or obstructions to the general aim of the Associations by any minister. Rather than attrition from the ranks of the associations, the association grew exponentially and functioned cohesively for the next 20 years.

However, during the Twentieth (1885) annual session held with the Church of Christ at Providence, Edenton, Chowan County, on the Tuesday after the third Lord’s Day in May, 1885 some unusual events occurred. First, “owing to some misunderstanding on the part of the chair during the first day’s sessions, it was harmoniously settled by the Moderator begging to be excused.” Secondly, the ordained elders from beyond the Chowan River in Hertford County refused to accept the positions whereto they were elected. Thirdly, on motion, T. M. Collins was empowered to grant letters of dismissal to 38 churches who petitioned in Gospel Order.

In May 1886, the association convened at Antioch Church, in Camden County, with many of its most stalwart members being absent, and their voices silent within the hollowed and sacred walls of the Antioch Church. The Reverends C. M. Cartwright at First Baptist Severn, H. H. Norman at Second Baptist Colerain, M. W. D. Norman at Zion Hill, maintained their pastorates within the Roanoke Missionary Baptist Association, although their churches were members of the splinter group, the West Roanoke Missionary Baptist Association, then known as the Upper Bound Union Meeting.

In accordance with the call issued by the Upper Bound Union Meeting, several churches convened at Zion’s Grove, Hertford County, on Tuesday after the second Lord’s day in May 1886. Rev. Wm. Reid stated the object of the meeting and was elected chair pro tem. The secretary then read the call as made by the Union meeting. The churches were called for and 37 enrolled. As some churches which had been dismissed from the Roanoke Missionary Baptist Association had failed to obtain letters, the following motion prevailed: “That all churches that can satisfy this body that they have been properly dismissed from the Roanoke Association may become members of this body.”

There is no recorded information about any joint associational effort to bring the two associations together during the 133 years separation. However, there are exceptional accounts of pastors from East Roanoke and pastors from West Roanoke entering each other’s associational boundaries to conduce funerals, revivals, and weddings.

The Associational Greetings were given by the Moderators Harris and Whitehead. Rev. William Clark, former moderator of the West Roanoke Association, and the pastor of New Bethany Church, Harrellsville and First Baptist Rich Square, recognized the clergy from his association. Rev. Dr. Linwood Morings Boone, member of the Stony Branch Baptist Church, Gates, and pastor of the Corinth Chapel United Church of Christ, Suffolk, Virginia, gave a historical brief of the early days of the Roanoke Missionary Baptist Association, and introduced 30 members from his church to the assemblage.

Rev. William C. Clark’s ministerial support in this endeavor was invaluable. The two associations and their representatives ended the joint worship service by taking a joint service photo, which included 60 ministers.

Kelly Baker and Brice Smithwick were married May 5 in a ceremony conducted at Silo Farms, Aulander. The bride is... read more