JACKSON – With everyone dressed to the nines and ready to have a good time, attendees at the first Mayor’s Charity Ball danced the night away.

The formal dinner and dance event, held at the Cultural and Wellness Center in Jackson on Saturday, June 2, was organized by Woodland Mayor Kenneth Manuel and his wife Pattie. The goal of the charity event was to raise money to help establish a library within their town.

“The closest library is in Murfreesboro and that’s 11 miles away from us. And the only one in Northampton County we would be able to use is in Jackson. That’s 17 miles away,” said Mayor Manuel. “We need something here. A lot of folks don’t have transportation. We want to be able to have things here in town for them to be easily accessible.” 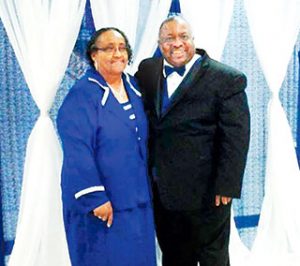 The committee to make this goal a reality consists of Mayor Manuel, Pattie, Carolyn Spruill, Pastor Jane Mann, and her husband Bobby Mann. Manuel said the group has been working two years now to create a library in Woodland.

“All of us on the committee definitely consider this to have been a successful mission,” Manuel reported of the Charity Ball.

Over 100 people turned out for the event. Many were locals from Northampton County while others travelled from as far away as Creswell and Wilson to attend. Several local government officials came out to show their support as well, including other Northampton County mayors Roy Bell of Garysburg, Alice Delbridge of Gaston, and Geraldine Langford of Seaboard.

Mayor Manuel noted a “special thank you” to Julius Webb of Northeastern North Carolina Advocacy Organization for Advancement, LLC. Webb donated the money to cover expenses for the charity ball such as food cost and rental fees.

“Tremendous appreciation goes out to him for that,” Manuel said. “That’s how strongly some people feel about this vision, about the need that is here.”

Mrs. Manuel catered much of the food for the event, providing a wide variety of entrees, sides, and desserts. Mayor Manuel acknowledged his wife did an amazing job getting everything ready ahead of time.

He said he believed everyone enjoyed the evening while dancing and mingling together.

“It was a very handsome crowd,” he said of the event’s formal attire.

But above all, they didn’t lose sight of their ultimate goal. Manuel reported that the Woodland Town Board recently agreed to donate a building to house the future library as well as to pay for the electricity and internet service. The building, located on Spruce Street (Highway 35), previously served as an office for Nationwide Insurance.

“There’s still some work that needs to be done,” he said.

He said he hopes the people of the community will want to support the library and invest in its success.

If the Mayor’s Charity Ball is any indication, however, many of them already do.

Teens arrested in rash of B&Es