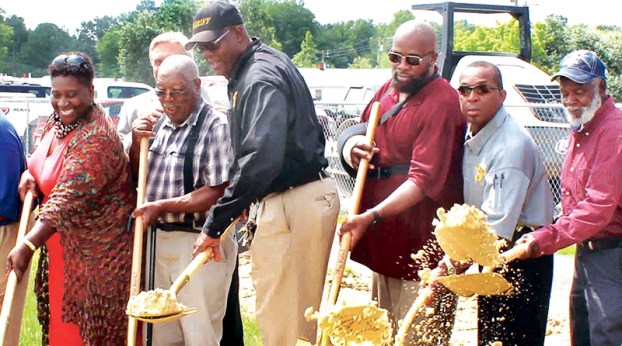 His vision was that despite the rural, backwoods location of his home community of Blue Jay in the Indian Woods section of southwestern Bertie County, Smallwood could improve the health, safety, and quality of life for his neighbors.

Among his projects was the establishment of the Blue Jay Volunteer Fire Department, and it’s also how and why in the 1960’s, Smallwood helped establish the Blue Jay Recreation Committee with the goal of providing wholesome, quality recreation for both youth and adults in the community.

He organized baseball and basketball teams where players were required to make a solemn pledge: “I trust in God. I love my country and will respect its laws. I will play fair and strive to win; but win or lose, I will always do my best.”

On May 31, ground was broken on the Blue Jay Recreation/Community Center just a few yards away from the Fire Station. North Carolina Governor Roy Cooper was scheduled to be in attendance for the ceremony, but more pressing matters like the extreme flooding in the western part of the state forced him to alter those original plans.

Instead, members of the Blue Jay Fire Department, Smallwood family members, and others in the community joined with Bertie County dignitaries in the sweltering late spring heat for the groundbreaking.

Back in 2016-17, Bertie County Commissioners pledged to make the Blue Jay Recreation Park a key priority and approved initial funding of $83,450 to address parking and street access, demolition of an existing unsafe structure onsite, and preliminary work on an ungraded building with restroom and concession facilities.

The Kate B. Reynolds Charitable Trust, a Winston-Salem based charity, awarded the project a capital grant of $150,000 to support construction of an eight-foot wide paved walking trail around the five acre site that serves as Blue Jay Park. 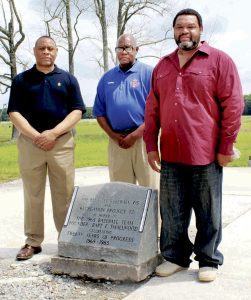 NC A&T professor, Dr. Arvin Smallwood, (left) poses with his brothers Anthony (center) and Brady (right) at a headstone dedicated to their father, Bart F. Smallwood, founder of the Blue Jay Recreation Project. The marker sits on the site where the Rec/Community Building will be built thanks to grant funds. Staff Photo by Gene Motley

In August 2017, the State of North Carolina approved an additional $80,000 grant through the NC Department of Cultural Resources which will help provide more funds for the construction of the 70-x-100 foot community building.

“It means a lot to me because of the hard work and effort he made to build up this community,” said community activist Anthony Smallwood, one of Bart Smallwood’s five offspring. “We were a big family and my father wanted to make life better for other people that had value and represented our community.”

The site sits on what was once the largest Tuscarora Native American reservation in the Southeastern United States.

“This was not just a community for the Indians,” Smallwood continued, “but rather for all the people.”

Bertie County Commissioners chairperson Ernestine Bazemore – who is the District-5 representative for Blue Jay – stood in for the governor at the dedication and was Mistress of Ceremonies.

“Blue Jay is not a municipality, but it’s just as important a community as any other place in Bertie County,” she remarked. “We made this a priority and it has come to fruition.”

“A lot of the people here are family, and they love each other, and that’s what makes a community,” Wesson said. “That’s why we want to make sure we keep this community together and try to improve it. You make all of us proud.”

Ronald Rascoe, one of the Recreation Committee members who helped spearhead the drive to get funding for the upgrades, said the efforts of many made this possible.

“The grass here was once as high as my waist,” he noted. “But the folks all pulled together and took our time and money and kept going , so this is a proud day that has come. We wrote letters, we sold plates, whatever effort it took for us to make it.”

Rascoe said acquiring non-profit status as a 501c 3 was the first step to helping receive funding.

“He poured his heart and soul into what is here,” Smallwood said. “This community has been here for over 500 years, and recent events have shown how Bertie County can attract people here to understand and appreciate our history. Some of us may have left the area; but this community never leaves us. I wouldn’t be who I am without you.”

James Pugh of nearby Spring Hill said much sacrifice went into this effort.

“If we move,” he said, “we must move together, and like Bart Smallwood, move with love.”

“We never gave up,” said Blue Jay Fire Chief Robert Cherry in closing. “And we thank all those whose resources helped make this day possible.”

Afterward, the groundbreaking took place. Recreation Committee members say they hope completion will take place by the end of next winter.

Arts in the Park

JACKSON – Under the shade of the old oak tree in the park behind Jackson’s historic courthouse, local artists from... read more