BOSTON, MA – Berklee College of Music has named Ron Savage B.M. as Dean of the Professional Performance Division at the college. Savage will oversee the division, which provides the music performance curriculum to all Berklee students, including private lessons, labs, ear training, and ensembles.

Savage grew up in Ahoskie and graduated from Berklee with a degree in performance in 1984. He was hired to teach ear training in 1993, and over the next four years also taught in the Percussion and Ensemble departments. He was appointed chair of the Ensemble Department in 2000, and served in that role for 17 years, until his appointment as interim dean.

While chair of the Ensemble Department, he significantly increased the musical diversity of ensemble offerings including gypsy jazz, acoustic blues, neo-soul, women in rock, heavy metal, reggae dub, and many more. During his tenure at Berklee, he has conducted over 10,000 admissions auditions and participated in more than 60 Berklee on the Road clinics, including 23 Umbria Jazz clinics. Earlier this year, he received the Reverend Dr. Martin Luther King Jr. Drum Major for Community Service Award by the Cambridge, MA chapter of the NAACP. 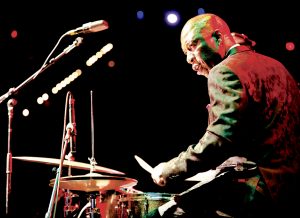 An accomplished musician on the drums, Ron Savage, formerly of Ahoskie, has been named as the Dean
of the Professional Performance Division at Berklee College of Music in Boston. Photo by Kelly Davidson

“Ron has demonstrated an extraordinary commitment to music and music education through his 25 years as a faculty member and chair at Berklee,” said Berklee President Roger H. Brown. “He transformed the Ensemble Department as its chair, and will continue to lead the Professional Performance Division with the same passion and drive that he brings to everything he does.”

Savage is an acclaimed drummer with a special focus on jazz and blues. He has performed extensively around the world with a wide array of performers, including James Moody, Clark Terry, Curtis Fuller, Mulgrew Miller, Joe Zawinul, Nnenna Freelon, Vanessa Rubin, Sam Rivers, Albert King, and more.

Savage is also a passionate community advocate. He and his wife, Lois, founded the ALMI/Ron Savage Music Academy in 1999, which is committed to providing inner city youth with affordable music lessons and instruments. He serves on the board of the All-Dorchester Sports and Leadership program in Dorchester, Massachusetts. More recently, he founded the Cambridge Jazz Festival with Larry Ward.