AHOSKIE – Trailing 8-1, Ahoskie Post 102 rallied from the deficit to beat the Cary Bulls 11-8 here Saturday afternoon, thus combining with Windsor to complete a sweep of the Bulls in junior American Legion baseball action.

Cary, already stung by a heartbreaking 12-11 one-run loss to Post 37, opened the scoring with four runs in the top of the first inning and led it 4-0 after one complete.

The Bulls added another run in the top of the third to lead it 5-0 after two-and-a-half.

Ahoskie got on the scoreboard in the bottom of the frame on an Alden Lassiter RBI single to trail by a 5-1 count after three innings of baseball.

In the top of the fourth, Cary got that run back – and another – to lead the contest 7-1 after four innings.

The Bulls scored their eighth and final run in the top of the fifth inning and after four-and-a-half, Cary posted an 8-1 lead. 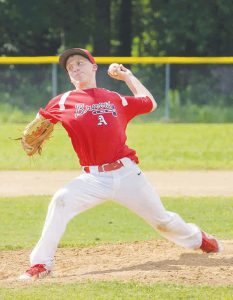 Ahoskie’s Avery Harris delivers a pitch for a strike in Saturday’s second game of the doubleheader featuring the Post 67 Bulls. Harris got the win and collected a pair of hits as the Area-One teams made it a sweep over visiting Cary. Post 102 won their third game in a row with the 11-8 victory. | AA Imaging / Andre Alfred

Ahoskie bats came alive in the bottom of the fifth when they put up six more runs. Alden Lassiter had his second RBI single of the game. Avery Harris and Tyrek Beverly scored on a two-base error when Trent Hobbs got aboard on the miscue. Lassiter would score on a wild pitch, Hobbs scored on a balk, and Steven Futrell scored on a wild pitch. Cary’s lead was cut down to a single run, 8-7 after five complete innings.

The Braves weren’t done with their scoring, tacking on four more runs in the bottom of the sixth. Hobbs was hit by a pitch with the bases loaded, producing the tying run at 8-8. Alden Lassiter then scored the go-ahead run on a wild pitch for Post 102’s first lead of the game. Hobbs then scored on a Bulls error and Jonathan Ambrose got the final insurance run with a suicide squeeze bunt, good for another run-batted-in to make it 11-8 after six.

In the top of the seventh inning, Cary threatened, but Ahoskie was able to induce a pair of strikeouts to end the game and post their third straight victory.

Alden Lassiter pitched two innings for Ahoskie while Avery Harris pitched four innings for the win. Logan Early pitched one inning to get the save.

Ahoskie banged out 11 hits. Alden Lassiter had three hits, Beverly and Harris had two hits apiece, and Hobbs, Parker Bradley, Chase Edwards, and Ambrose all had one hit.

“It was another good comeback win for us,” said a relieved Braves coach David Ellis. “We didn’t give up when we fell behind 8-1. We battled all game and got some big hits late in the game. Avery Harris did a good job on the mound pitching for us and Logan Early came in and shut them down.”

Ahoskie raised its overall record to 4-1 with the non-conference win. The Braves return to league action Wednesday in Windsor when they face Post 37 in a 7 p.m. contest at Bertie High School ball field.

AHOSKIE – Ahoskie Post 102 rallied for three runs in the bottom of the seventh inning with the winning run... read more