AHOSKIE – Ahoskie Post 102 rallied for three runs in the bottom of the seventh inning with the winning run scoring on a two out-two run walk-off single by Alden Lassiter as the Braves beat Albemarle 6-5 here Wednesday night in a junior American Legion baseball game.

With the win Ahoskie moved to 2-0 in Area-One conference action.

Post 84 opened the scoring with a run in the top of the first inning and that score held through the first full inning of baseball at 1-0.

Ahoskie broke through with three runs in the bottom of the second inning. Logan Early walked and Parker Bradley reached first on an error to get a pair of runners on base. Pinch-runner Keyshawn Lassiter came on to run for Bradley and stole second base after Early stole third. Early would score on a wild pitch as Lassiter moved 60 feet away from also crossing the plate. Tyrek Beverly then drew a base-on-balls and stole second to get both runners in scoring position. That’s when Alden Lassiter delivered his first RBI with a two-run single to centerfield and the Braves were in front 3-1 after two complete.

Albemarle crept closer with a run in the top of the fifth, but Ahoskie still held the advantage, 3-1 after five. 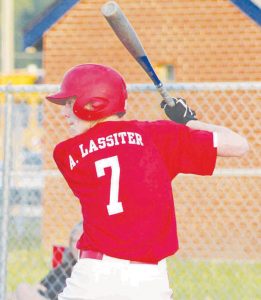 But the Wildcats put three runs on the board in the top of the sixth to surge ahead, 5-3 after six innings.

After Post 84 failed to add to their lead in the top of the seventh, Ahoskie was down to its final three outs. The Braves opened the bottom of the seventh with Early drawing a one-out walk and Bradley singling to left for two runners on base, and Early would score on a T.J. Lassiter RBI single to left. Beverly then reached on a fielder’s choice, but pinch-runner Sam Doughtie – running for Bradley – was out at second for the second out. Zack Lassiter – running for T.J. Lassiter – then took second base on a wild pitch, and took third on the fielder’s choice. Beverly then stole second, putting both runners in scoring position before Alden Lassiter became the hero of the night. His base hit over the right fielder’s head allowed the game winning run to score, setting off a wild celebration by the Ahoskie players and their fans.

Ahoskie had six hits. Alden Lassiter led the attack with two hits and four runs-batted-in. Trent Hobbs also had two hits while Bradley and T.J. Lassiter had one hit each.

Hunter Mitchell pitched three-and-two-thirds innings for Ahoskie and Trent Hobbs pitched two-and one-third inning. Logan Early relieved in the seventh and is credited with the win for the Braves.

“This was a good conference win for us,” said Post 102 coach David Ellis. “We battled back and got some big hits in the seventh to cap the comeback. Hunter, Trent, and Logan all pitched well. I’m proud of the team and we’re 2-0 in the conference.

Ahoskie is also now 3-1 overall and will not play Cary on Friday night. Instead, they will host the Bulls on Saturday at Hertford County High Field at 3 p.m. right after Cary plays Windsor Post 37 in a 12 noon contest. Sunday, Ahoskie will play the newest member of Area-One, Wake Forest, in a doubleheader beginning at 2 p.m.