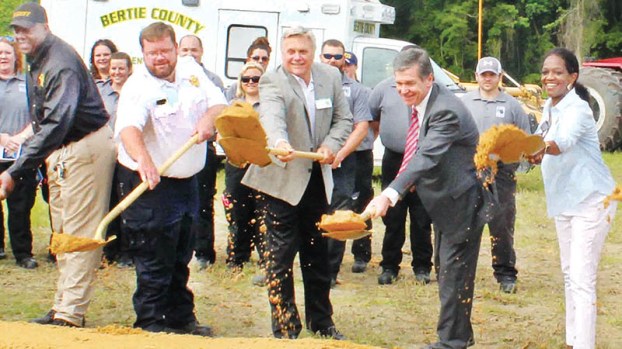 Twenty-one and a half months later, ground has been broken on a new county EMS main facility (Station One); and, circumstances permitting, they hope to be rolling out the first emergency vehicles from the new location by Christmas of this year.

When he first toured the damaged area as state Attorney General some six weeks from his election as governor, and on subsequent tours in the months that lay ahead, Roy Cooper promised aid in helping the county restore the facility. 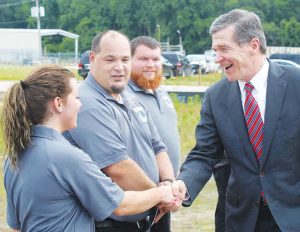 Governor Cooper greets Bertie County EMS first-responders during a visit to the county on Thursday.

Thursday, he returned again, this time to grab a ceremonial shovel and move some earth as the first step to a new replacement facility.

“Let’s go shovel some dirt,” the governor said as he joined state and county dignitaries for the groundbreaking.

Thanks to a $300,000 grant through the North Carolina Department of Commerce, the replacement station will be built on a tract of land on County Farm Road, south of Windsor, near the Bertie County Sheriff’s Office.

“It’s a very proud moment for all of us in Bertie County, not just EMS, but countywide this is going to be a move forward for our system, our citizens, and our employees,” said County Emergency Services Director Mitch Cooper before the ceremony.

“It’s sad that it took an event like Hurricane Matthew to get it here, but it’s a great day to move forward; we’re not moving backward,” Cooper added. “It really shows the resilience of Bertie County.”

Cooper said the facility will be ‘state-of-the-art’, which is significant for a county such as Bertie with a wide swath of area to cover despite such a small population.

“Really what it comes down to is we needed to take care of our staff so they can take care of our citizens,” Cooper maintained. “When we talked about the design we wanted something that was safe and work-friendly for them because working 24 hours a day and the stress that comes with it we wanted to make sure we put their health and wellness at a priority. This will certainly make their jobs easier.”

The Commerce Department grant was merely a part of the total recovery effort. The Federal Emergency Management Agency (FEMA) approved $284,294 in funds to cover some of the operational expenses during the recovery period; and the Kate B. Reynolds Charitable Trust of Winston-Salem gave $51,450 to cover the expense of outfitting the temporary locations for the EMS Station: first at the Council of Aging near downtown, and later at the current temporary location at the Bertie County Early College High School off Governor’s Road.

Bertie County Commissioners’ chair Ernestine Bazemore served as mistress of ceremonies for the groundbreaking, assisted by vice-chair Ron Wesson and fellow Commissioner John Trent. In addition to other county personnel in attendance were Windsor Mayor Jim Hoggard and Windsor Town Commissioners Randy Whitaker, Kathy Wilson, and Randy Walston with Town Manager Allen Castelloe. All had taken a significant role in sending out the clarion call for aid from the state and federal level following the disaster. 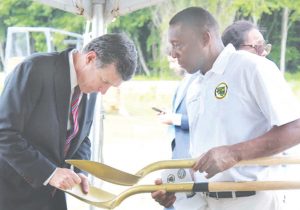 The Governor autographs one of the ceremonial ground-breaking shovels for Bertie County Maintenance Director Anthony Rascoe.

“We all want to set an example of how citizens and their elected officials, federal and state leaders can work together to overcome obstacles,” Wesson said. “At one point we were staring at devastation, and now we’re looking at recovery.”

Governor Cooper stated that he was proud to compare his earlier visits to the progress he is now seeing being done.

“The last time I visited there was more struggling, but there have been improvements, and there’s more improvement ahead,” he declared. “And it’s because of the resilience of the people of Bertie County who stood up strong to meet the challenge; and we want to help.”

Cooper pointed to the 44 businesses that were impacted by the storm as well as over 100 homes. That list also included the Bertie County Cooperative Extension Office and the Bertie County Public Library, both of whom hope to get a new permanent facility shortly. He cautioned that help and aid can’t come fast enough.

“In the past months all of us have made progress here and across the state; putting out more than $630 million on the ground supporting business and infrastructure,” he acknowledged. “Recovery can be a frustrating process, but we must push forward as fast as we can.”

The governor said in addition to Community Development Block Grant funding to help with housing, they are working to open a Hurricane Matthew Application Center to serve Windsor and Bertie County. He said he wants it open by June 20, at a location to be announced.

“Just like housing and schools, emergency services are vital to the health, prosperity, and wellness of communities like this, and that’s why I’m excited to be here for this groundbreaking,” he stated. “This is a meaningful step forward in recovery so that you can keep citizens safe in times of trouble.”

Cooper said there’s still a lot of work to be done, but he pledged that he will work to see that no one will be left behind. He also thanked the volunteers and the faith-based communities for helping the area get back on its feet.

“They worked really hard, in addition to whatever they do for a living, to serve the citizens of Bertie County,” he intoned. “And we thank them for that tireless effort. If we all work together we can make a North Carolina that works for everyone.”

“It’s all teamwork,” echoed EMS Director Cooper. “Every one on the team is part of a chain. And Bertie County has one heck of a chain and every link in it is as strong as you can get.”

WINDSOR – It was a day when Bertie County’s own came out to honor their own, and pay respects to... read more