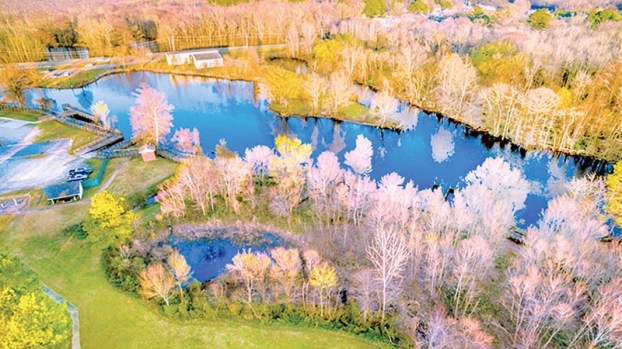 Riverwalk will be part of a display by Windsor resident Thaddeus Watkins at the Friday Center at UNC Chapel Hill. An opening reception is slated for 6:30-8:30 p.m. on June 1. The exhibit will run until August 15. | Photo by Thaddeus Watkins

WINDSOR – Windsor, North Carolina is a small town in Bertie County on the inner banks of the Albemarle Sound. The county is best known for its barbecue, its “blister fried” peanuts, and as the address of Historic Hope Plantation, the home of David Stone, the state’s first governor.

Windsor is central in North Carolina’s coastal plain region, defined by the flatness of its geography. The dominant feature of any drive, walk or boat outing in the area is the strong linear horizon.

Photographer Thaddeus Watkins is exploring a new perspective on this landscape. In a growing portfolio of 17 x 22-inch color prints, he composes lofty views of the built and farmed environments of the area. Watkins has sent his remote-controlled camera, as he says, “into the z-axis.”

A cancer diagnosis in the autumn of 2017 prompted him to expand on his hobby of flying small quadcopters: he purchased a commercial-quality quadcopter with a stabilized camera. His ability to fly a high-quality camera up to a height of 350 feet has made the face of the earth his new subject.

The Windsor Portfolio of aerials will be featured in an exhibition opening June 1 at UNC’s William and Ida Friday Center for Continuing Education in Chapel Hill. The exhibition, which runs until Aug. 15, will also include many vintage prints from Watkins’ 38-year career, living and traveling in Europe, New York, and North Carolina.

Matted and framed prints will be available for purchase at the exhibition and proceeds will help defray Watkins’ mounting medical costs.

Watkins has marshalled his energy into a remarkable fresh look at the land of his colonial ancestors. Curator Philip Beal says, “Thaddeus’ photographs exemplify our goal to show Friday Center visitors the best work being made by artists associated with the State and the University.”

Thaddeus and his wife Rusty Walden have spent most of their career in advertising and commercial photography. The couple met as undergraduate photographers on the yearbook staff at UNC and developed an instant rapport. They moved to Munich, Germany after college and created a body of artwork they exhibited in Munich and Florence, Italy. Returning to the US, they established a commercial photography business in Chapel Hill in the 1980’s and Greensboro in the 1990’s. Thaddeus was at the camera with Rusty providing the essential role of stylist and make-up artist for their subjects.

In 1997 they made the move to New York City to pursue further commercial work and entertainment portraits. A photograph that enhances the subject’s self-image can be powerful encouragement to any career. One long-term client, the American Nurses Credentialing Center in Silver Spring, MD recently honored him with a Proclamation declaring “Thaddeus Watkins, official and best photographer of ANCC ever.”

For more info about the photo exhibit, contact the Friday Center at 919-962-3000 or visit fridaycenter.unc.edu.

AHOSKIE – “It is an honor and a privilege to announce that our own Roanoke Chowan Christian Women’s Job Corps... read more