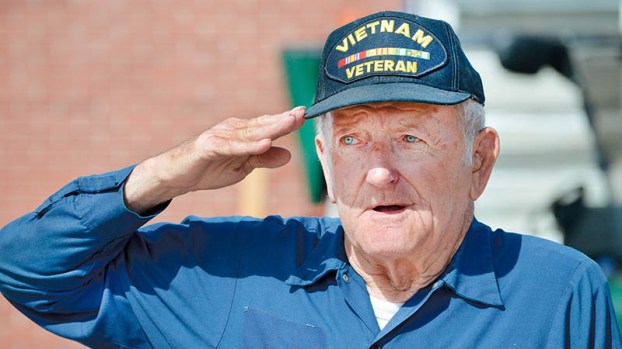 CONWAY – The Town of Conway sponsored their Memorial Day Ceremony on Monday. People were greeted by a wonderful picture perfect morning with blue skies and pleasant temperature. Arriving early, people met, greeted and socialized with each other.

Mayor Tommy Barrett (US Air Force 1966-1970) welcomed the crowd who came out to show their support.

Town Commissioner Lokie Majette (US Army 1966-1997) gave the opening prayer. The crowd participated in singing the National Anthem and reciting the Pledge of Allegiance with right hands resting over their hearts. Veterans’ salutes were crisp and silent.

Mayor Barrett introduced the speaker, Rev. John Porter, pastor of Meherrin Baptist Church since Jan. 1, 2017. He served in the US Army from 1995-1998, careered in computer technology, until being called to pastor at his church.

Since the Revolutionary War and down through the ages, soldiers have made the ultimate sacrifice to protect our freedom, way of life and democracy.

Pastor Porter pointed out these ultimate sacrifices. This death cancelled the soldier’s hopes, dreams and his life.

The soldier’s family – parents, siblings, spouse or significant other, children, other family members and friends – have shed tears, hurt and missed this absent soldier. North Carolina has lost it share to wars and conflict.

Stewart Lane (US Army 1959-1998) and Robert “Whitey” Jenkins (US Army 1966-1968) performed the laying of the wreath. Taps was played. Silent salutes expressed respect and thanks for ultimate sacrifices that has preserved liberty and justice.

Formally known as Decoration Day, Memorial Day honors and remembers men and women who were killed as battles raged on land, air and sea while serving in the US Military.

Soldiers who later succumbed to wounds sustained in battle or complications are also memorialized.

Decoration Day originated after the Civil War and became a federal holiday in 1971 to be observed each year on the last Monday of May.

Highly decorated and honored Carl R. Britt, a WWII Veteran of Milwaukee, participated in and witnessed the atrocities of war, the horror of it all and the death of fellow soldiers and friends. He was in attendance as the eldest veteran to show his respect to the sleeping soldiers of our US Military.

JACKSON – “Today we honor those who gave their all, gave their life for our freedom. They gave the ultimate... read more