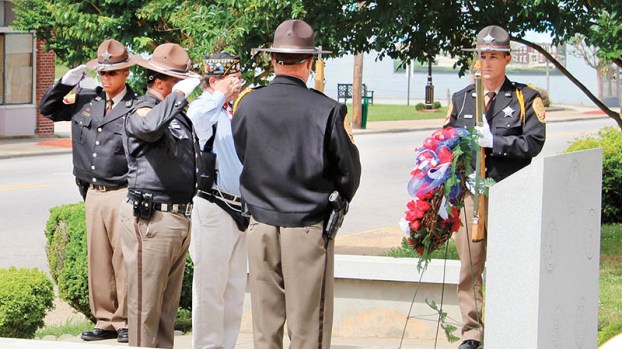 Monday’s Memorial Day ceremony in Jackson saw members of the Northampton Sheriff’s Honor Guard place a wreath on the grounds of the county courthouse. | Staff Photo by Holly Taylor

JACKSON – “Today we honor those who gave their all, gave their life for our freedom. They gave the ultimate sacrifice,” said retired Sgt. Major Johnnie Ray Farmer as he addressed the crowd gathered in front of the Northampton County Courthouse here Monday.

The annual Memorial Day event was organized by Northampton’s Veteran Service Office Director Diane Hale. Each year she includes a moment to recognize veterans in the audience. This year’s attendees represented all branches of the United States Armed Forces. Several were Vietnam veterans and one was a World War II veteran.

Hale led everyone in a recitation of the Pledge of Allegiance, and then Morgan Lassiter performed the national anthem.

Farmer, a Hertford County Commissioner and former JROTC instructor, was the keynote speaker for the ceremony this year. He wore a red poppy flower on his shirt to show respect for the soldiers who were killed in action.

“Memorial Day now is often overlooked. For many Americans, it simply marks the beginning of a long weekend for the summer,” Farmer said before explaining the holiday is meant to remember those who gave the “ultimate sacrifice.”

In his remarks, Farmer noted that the 100th anniversary of World War I was already underway. Before the first world war, he said, the United States Army had less that 200,000 servicemen. That number swelled to 4.7 million servicemen during the height of the war. He also noted the 50th anniversary of the Vietnam War coincided this year.

“We lost some great men and women in Vietnam,” said Farmer who served in the Army in Vietnam after being drafted in 1969.

Farmer researched the names of Northampton County soldiers who lost their lives during those two wars, and he recognized several of the fallen during his speech. He also specifically recognized Army Sgt. Will McLawhorn Jr, a Conway native who was killed in action in 2010.

“We remember his patriotic service, but most importantly, we remember his great sacrifice for us, for freedom and world peace,” he said about McLawhorn.

In closing, Farmer passed on a few words of advice about how to honor fallen soldiers, not just on Memorial Day but every day.

“Honor them by living your life for them and yourself. Be a good citizen. Enjoy your freedom with respect for those who gave their all,” he said. “These young men and women did not have that opportunity. They could have been doctors, lawyers, nurses, truck drivers, carpenters, husbands, fathers, great Americans, but they did not have that opportunity to fulfill the American dream. So live your life well. Live for them and never forget what they did for all of America.”

The Northampton Sheriff’s Honor Guard then placed a memorial wreath on the grounds at the Courthouse, and everyone silently listened to Taps play as the flags fluttered overhead at half-staff.

After the ceremony, Hale said she was very appreciative at the turnout for the event. Most people she explained don’t think about or understand what soldiers have sacrificed.

“It was a good service,” she said. “I hope to be able to continue this for years to come.”

Farmer said after the ceremony he feels brokenhearted especially for all the young people who have given their lives in service.

“People all over the world want to come to America because of the American dream, but they (service members) go overseas and give up their American dream,” he said.

Those sacrifices are the reason why Memorial Day is held every year.

Murfreesboro ceremony serves as lesson in heeding the ‘call’

MURFREESBORO – John Young knows what it’s like to be “called” to service. As a 30-year law enforcement veteran, the... read more