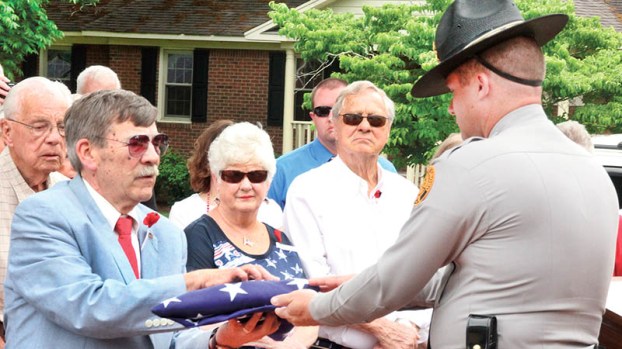 Murfreesboro ceremony serves as lesson in heeding the ‘call’

MURFREESBORO – John Young knows what it’s like to be “called” to service.

As a 30-year law enforcement veteran, the Jackson Police Chief has been summoned on numerous occasions at all hours of the day and night to rush to the scene of an accident, a shooting, a missing person, a fire, etc.

On each occasion, Young made it back safely to the welcoming arms of his family and co-workers. However, he has a deep appreciation and respect for those family members and friends whose loved ones did not return alive after heeding the call.

Young made that point stick to the inner souls of those attending the annual Memorial Day celebration held Monday morning in front of the Murfreesboro Municipal Building. He was the keynote speaker at the event, one held with the town’s War Veterans Memorial serving as the backdrop.

“Why do men and women volunteer to serve their country as members of the military,” quizzed Young. “I feel it’s because of their love to their family and to their country. They felt it was the right thing to do, to answer the call to serve and they did so with honor and distinction. They voluntarily signed up and went to war in a foreign land for their country.”

Young noted that these individuals certainly did not enlist in the various branches of the military for the money.

“So, again I ask why do they choose to serve,” Young pondered. “Perhaps the answer can be found in the Bible. Isaiah Chapter 6, verse 8 reads: ‘Then I heard the voice of the Lord saying, “Whom shall I send? And who will go for us?” And I said Lord, “Here am I. Send me”!’ Maybe that’s why they choose to answer the call to serve because our God called them.”

He told the story of Gunnery Sgt. Chris Eckard of Hickory who, during his fifth deployment to Afghanistan, was killed in February of 2010 while defusing a bomb. Young also recalled the life of Sgt. Will “The Claw” McLawhorn, a Conway native and friend of his family who was killed in action in Afghanistan in December of 2010.

“It’s right and fitting that we gather like this on the last Monday in May to pay our honor and respect to those brave men and women who laid down their lives so we can live in freedom,” Young continued. “If I had my way, we would pay our respects to them each and every day of the year because freedom is not free, it came through the sacrifices made by so many.”

Young said his father served in the U.S. Navy during War World II, fighting in Iwo Jima and Okinawa.

“I never knew he was injured during the war until one of his brothers told me about it; my father never talked about those times,” Young shared. “Later, after having a family, we would go to the beach and my dad refused to get in the water over his knees. I learned from my uncle that my dad feared the water after losing so many of his Navy comrades at sea.

“There are so many veterans who simply do not want to talk about what they saw in war; those memories are too painful to speak about,” Young added. “I understand that.”

“My wife and I were lucky as they both came home,” Young remarked. “I asked them why did they serve and they answered just like so many others….it was what they felt was the right thing to do.

“That’s what make them so special; that’s what makes each and every military veteran so special as they answered the call to serve the best country in the world, the bastion of freedom which is the United States of America. We fight for freedom and that’s what separates from the rest of the world and I thank and honor those who have answered that call,” Young concluded.

Murfreesboro Police Chief David Griffith, assisted by MPD Sgt. James Dilday and Officer Bryan Johnson, lowered the ceremonial flag (one that flew over the nation’s capitol on March 1, 2007), handing it to Mayor Thomas for safe-keeping until the next celebrated event. That precise drill was accompanied by the traditional playing of “Taps” by Darren Piper.

Afterwards, a group of Murfreesboro veterans raised the traditional colors flying above the War Memorial. The same group placed a wreath in front of the Memorial, one which now includes a new addition – a tribute to fallen soldiers that was donated by World War II veteran and multi-Purple Heart and Silver Star recipient Joe Dickerson.

The Rev. Lane Bass and the Rev. Shirley Johnson respectively gave the invocation and benediction.

The event concluded with an exhibit of World War II and Vietnam military memorabilia at the Murfree Center.

WINDSOR – It was a day when Bertie County’s own came out to honor their own, and pay respects to... read more