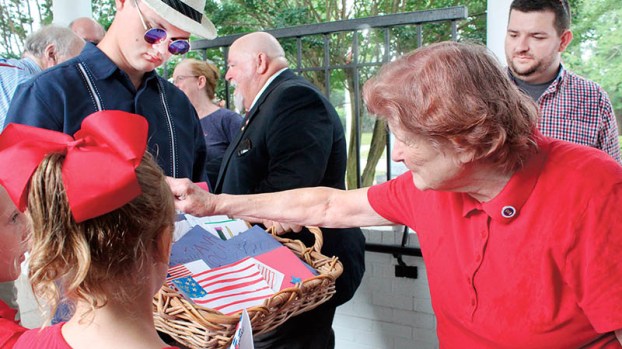 Special greeting cards in honor of Memorial Day were passed out to military veterans at the close of Monday’s event held in Windsor on the grounds of the Bertie County Courthouse. | Staff Photo by Gene Motley

WINDSOR – It was a day when Bertie County’s own came out to honor their own, and pay respects to all who have made the supreme sacrifice.

Bertie County and the Town of Windsor held its Memorial Day celebration Monday with a program dotted with native sons and daughters.

On the county’s courthouse grounds surrounding the Fallen Officers’ Memorial Stone, and with skies as grey as the granite marker etched with the names of the fallen, a crowd of some 70 observers gathered for a day themed: Respect, Honor, and Remember.

Retired Air Force Col. Brian Davis – who once commanded the 507th Air Refueling Wing with its nine squadrons at Tinker Air Force Base in Oklahoma – returned to his native Windsor and served as Master of Ceremonies.

“It’s always good to come back home,” Davis stated, peppering his remarks with humor for the short service.

The Bertie High School JROTC presented the colors, after which Dr. Gene Martin, pastor of Riverside Baptist Church in Merry Hill delivered a stirring invocation, giving thanks not just for the brave who sacrificed, but to the legacy of peace in our time such sacrifice has provided.

After a singing of the National Anthem by retired educator and former County Commissioner Charles Smith, words of welcome were extended by Windsor Mayor Jim Hoggard and Bertie Commissioners’ chairman Ernestine Bazemore.

Former Commissioner and ex-Windsor Mayor Bob Spivey, himself a Marine Corps veteran of World War II, and the first Gold Star family member who spoke, gave a history of the occasion of Memorial Day. Spivey spoke with reverence and remembrance as he reflected on the three brothers he lost during WW2.

“It is observed on the last Monday of May, honoring the men and women who died while serving in the U.S. military,” Spivey declared. “Originally known as Decoration Day, it originated in the years following the Civil War and became an official federal holiday in 1971.”

McLawhorn, a native of Kelford and graduate of Bertie High School, was the second Gold Star recipient on the dais to speak. McLawhorn’s son, Sgt. Will McLawhorn, was killed in action in Afghanistan nearly 10 years ago.

The younger McLawhorn, a graduate of Northeast Academy in Northampton County, enlisted in the U.S. Army and officially became an infantryman in 2007. After graduating from Army Air Assault training, he earned his Air Assault wings as a paratrooper with the 101st Airborne. It was only a short time after his second deployment with his unit overseas that he tragically lost his life proudly serving his country; the victim of a suicide bombing.

“All you have to do is look around and you will see their legacy,” McLawhorn intoned. “Their legacy is you and I, Americans gathered in a free society, united in a common purpose of honoring uncommon bravery. Regardless of the place or war that was fought, the purity of their sacrifice is without question: to make freedom possible.”

McLawhorn, who currently pastors Menola Baptist Church after retiring in 2013 following several years in the same capacity at Conway Baptist Church, juxtaposed the lives of a Medal of Honor winner with that of a Vietnam-era medic.

“For some of us, the remembrance of our fallen heroes is a daily ritual,” he recounted. “The heroes we remember today are not exclusive to any gender, race, or religion; they are merely rooted in one principle: that America is a nation worth dying for.”

McLawhorn also directed some special remarks to Gold Star families, those who have lost loved ones in conflict, with a personal reflection.

“It is up to us to remember,” he reminded. “Don’t be afraid to mention (Will’s) name, or tell me a story about him. Because while I may get teary-eyed, I’ll at least know that you remember him, and that’s all any parent wants is to know they have been remembered.”

McLawhorn closed his remarks with words from the late President Ronald Reagan, whose most famous speeches came at memorial services.

“Just as those we commemorate were willing to sacrifice, so too must we,” he affirmed. “So today, as we pause and remember, may we never forget.”

As McLawhorn took his seat, what had been a light drizzle of rain began to gently fall more steadily. Col. Davis then brought on a coda to the solemn moment.

“We may think it’s raining,” he noted, “but it’s just God’s way of christening our Memorial Day celebration.”

After another musical number, this one by guitarist Kelsey Ledford, there was the playing of Taps by the JROTC bugler, a benediction, and lastly, the removal of the flag colors.

Upon dismissal, special Memorial Day greeting cards were handed out to all veterans who were present.

WINDSOR – Perfect attendance. That will be a source of pride for the teachers in Bertie County Schools for the... read more