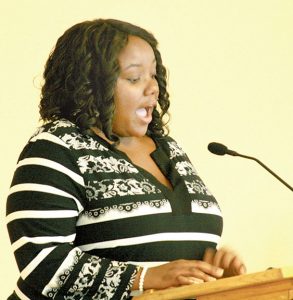 Wilson just graduated from Chowan University in May with an A average and has earned her degree in Education. She has been involved with the CWJC program since 2015 when she came to this area in need of assistance.

“We are so proud of her accomplishments and hope this award will help her as she gets a job and sets up her own residence. Being a teacher has been her dream and with God, hard work and determination, she has reached that goal,” Byrd stated.

Wilson was the key speaker at the recent Roanoke Chowan Christian Women’s Job Corps graduation where the award was announced.

AHOSKIE – Nearly 100 persons took part in the inaugural Ahoskie Community Block Party on Saturday, May 5 at the... read more