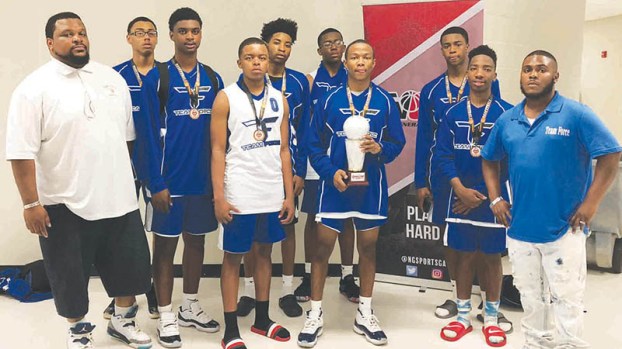 The squad, composed of former middle-school players, finished second in their division (9th grade Boys) in the ‘Rumble in the Peach State’ tournament May 19-20 in Atlanta, GA. Team Force fell just short of winning the national title by two points, 52-50.

“Most games are played in tournaments (some AAU sanctioned, some not) that take place on weekends,” Harrell said. “Positive reinforcement serves as the basis of our coaching staff’s philosophy. We are a highly competitive team and we push our players to be the best that they are capable of being on and off the basketball court; and at the end of the day we value the whole teams personal growth over winning.”

“It’s not about the coaches it’s always about the players at all times,” he explained.

Team Force opened Saturday’s pool play with a couple of wins: 66-43 over New Level United and then being just as efficient against EightBall Elite 59-33.

Those two wins sent the squad into Sunday’s round where the competition was much stiffer, but the group held their own. First, the did it with a 57-51 win over Coastal Empire Elite, which propelled them into the semi-finals. There, they faced the TCF Jayhawks, of Mississippi, and actually won surprisingly easily 51-32.

The championship showdown for the rising 9th graders would be against Nashville, TN powerhouse CBG, who had breezed through their first four games by beating their opponents by an average of 22 points per game.

The Music City quintet proved too much for the Ahoskie clan, as they held off a Team Force comeback and prevailed by two, 52-50.

“We want to continue to focus on our players learning the basic fundamentals of the game and then advancing at their own pace,” added Harrell. “Team Force coaches appreciate the commitment that each player’s family continues to make.  We recognize the many sacrifices and investments especially their time to support our players and we say thank you.”

Harrell said Team Force is a squad of eight committed players of which seven are honor roll students.

“We have volunteered in community services making a difference everywhere we go.,” he continued. “With two outstanding businesses/organizations: Perdue Farms of Lewiston (Community Day) and Smart Start of Murfreesboro (Easter egg hunt), we will continue to do service projects.

Over the two year span, Team Force holds a record of 62 and 8, 44-5 in 2017 and 18-3 this year, including playing for three championships. They have played in tournaments all over North Carolina (Greenville), Virginia (Richmond and Va. Beach), and Georgia (Atlanta).

“We owe a big thanks to all of our supporters and fans,” said Harrell.

AHOSKIE – Logan Early’s two-bagger in the bottom of the fifth inning turned out to be the game-winner that capped... read more