AHOSKIE – Logan Early’s two-bagger in the bottom of the fifth inning turned out to be the game-winner that capped a wild scoring evening for Ahoskie Post 102’s junior American Legion baseball team here Friday night as they topped Perquimans Post 126, 8-7.

Ahoskie rallied twice in the contest to win their Area-1 conference opener.

Perquimans wasted little time, scoring five runs in the top of the first inning, stunning Ahoskie with a 5-0 lead after a half-inning.

The Braves countered, though, with five runs of their own in the bottom of the second. Parker Bradley got aboard after he was hit by a pitch, and pulled for pinch-runner Avery Harris, who went to second on Travis Williams’ infield single. Tyrek Beverly then singled to left field and the bases were full of Braves. Alden Lassiter then ripped a two-run double to centerfield scoring Harris and Williams, and Beverly scored on a Trent Hobbs RBI single to centerfield. Steven Futrell then smacked a base-hit to left that scored Lassiter and after Ethan Hughson walked to re-load the bases, Hobbs scored on Hunter Mitchell’s RBI infield hit. That run knotted the score at 5-5 after two complete.

Perquimans struck back with a pair of runs in the top of the fifth to lead it at 7-5 after four-and-a-half.

In the bottom of the fifth, the Braves scored three runs to ice the game. Lassiter opened with a double to right field and scored on a Futrell RBI single to centerfield as Futrell took second on the throw home. Hughson drew a walk and was pulled for pinch-runner 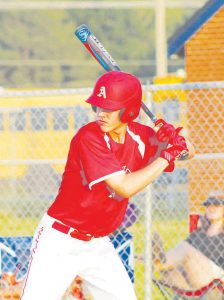 Zack Lassiter. Futrell scored on a Mitchell RBI single to center that tied the game at 7-7 as Lassiter was held at second. Lassiter would score the winning run on Early’s double into the gap in right centerfield, but Mitchell was thrown out at home on the same play, ending the inning but with Ahoskie back in front.

Perquimans got a runner on base courtesy of a one-out single in the top of the seventh, but Early, who came on in relief, struck out the next two batters to preserve the win.

Mitchell started and pitched four innings for Ahoskie. Early went the final three innings and is credited with the win for the Braves.

Ahoskie had 16 hits. Alden Lassiter, Beverly, and Futrell had three hits each while Mitchell and Williams had a pair of safeties apiece. Hobbs, Early, and Bradley had one hit for each of them.

“It was a good win in the conference opener,” said Ahoskie head coach David Ellis. “We got good pitching from Mitchell and Early, we got some big hits, and we came back twice to get the win.”

“I’m proud of them,” the coach continued. “We didn’t give up when we fell behind early.”

Ahoskie is 2-1 overall and 1-0 in Area-1 play. The Braves will play Albemarle Wednesday at home in another conference game with a 7 p.m. start. On Friday they will host the Cary Bulls at 7 in a non-conference game.