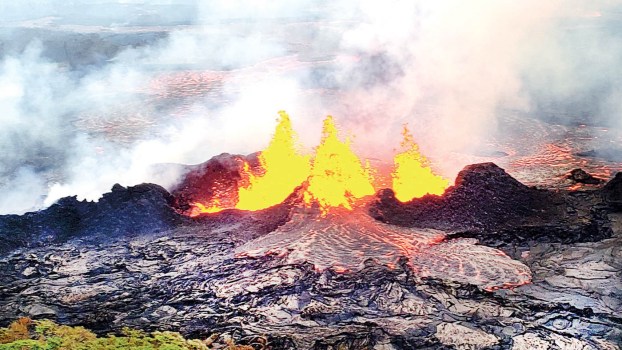 Since erupting on May 3, lava from the Mt. Kilauea volcano has torched nearly 2,500 acres and has destroyed over 80 structures. | Photos courtesy of Hawaii County Civil Defense

ISLAND of HAWAII – There’s always a first time for everything.

Over the course of his career as Gates County’s Emergency Management Director, Billy Winn has been involved in orchestrating recovery efforts in the wake of numerous weather-related events.

He’s seen the effects of hurricanes, tornadoes, floods, severe thunderstorms, ice storms, and even heavy snow that cripple his home county and regions for weeks on end.

However, Winn has never stared face-to-face with one of the world’s most violent phenomenons – a volcano.

That fact changed last week when Winn was among the 10 emergency management personnel from North Carolina sent to the Island of Hawaii to help out in the aftermath of Mt. Kilauea’s eruption. He was deployed May 19, arriving on the “Big Island” later the same day.

“It’s nothing like I’ve ever seen, except seeing one on TV,” Winn told Roanoke-Chowan Publications in a phone call late last week.

“Basically, we’re doing the same thing that emergency management personnel do in the aftermath of a disaster and that’s handling consequence management. The outcome is the same, just the cause of the incident is different.”

Winn said his previous perception of how an erupting volcano makes an impact is somewhat incorrect. 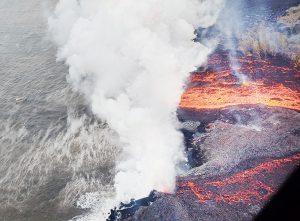 Steam bellows skyward as lava from the volcano meets the ocean.

“We see the images from the TV or in the movies where a known volcano erupts, explodes on the top of a mountain and then the lava flows and consumes everything in its path,” Winn explained. “Well, that’s true, but in this one there are fountains of lava coming out of the ground 20 miles away from the mountain. The earth is ripping open and fissures are opening within residential communities.”

Since erupting on May 3, lava from the volcano has torched nearly 2,500 acres and has destroyed over 80 structures.

“Hawaii County Civil Defense here are doing their best in keeping track of where these secondary fountains are forming and ordering evacuations,” Winn noted. “There are roads covered with lava, which forces their closure. In some cases they’re able to cover the fissure openings with steel plates in an effort to keep the road open.”

Similar to other natural disasters, volcanos cause residents to be displaced.

“They’re worried about losing their homes and property and I can’t much blame them for worrying,” Winn stressed. “Many are trying to get back to their homes, but those areas are closed off for now. Kind’a like what we see locally during a hurricane or tornado…..folks want to return to their property to begin assessing the damage and salvaging what they can.”

Despite the disaster, Winn said he’s impressed with the efforts of the local Civil Defense organization.

“They are a fantastic group to work with,” he said.

Winn and his North Carolina contingent are in Hawaii for a two-week deployment, which is scheduled to end June 5.

“We don’t know at this particular time if our deployment will be extended. If so, we will gladly assist the local officials here in any way we can.”

WINTON – Drastic times call for drastic measures. Starting off the budget planning process for the 2018-19 fiscal year with... read more