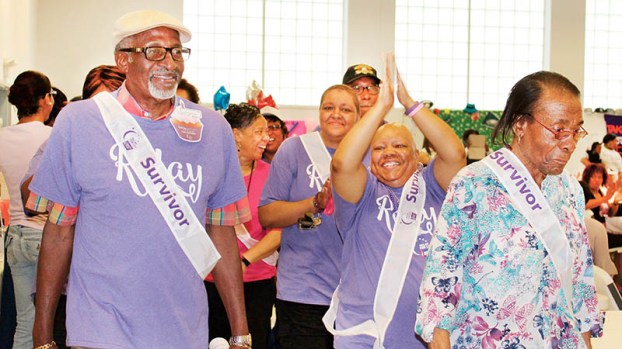 With Kool and the Gang’s popular hit “Celebration” playing over the speakers, cancer survivors make the first lap inside the Cultural and Wellness Center during Northampton County’s 7th Annual Relay for Life event held on Friday, May 18 and Saturday, May 19. | Staff Photos by Holly Taylor

“This is our first time in seven years that we have had rain,” said Laquitta Green-Cooper, one of the event organizers.

Usually the Relay is held on the grounds of the Cultural and Wellness Center in Jackson, with participants setting up tents around the walking track which winds its way around the facility. This year, Green-Cooper explained they moved everything inside, though a few groups still chose to set up outdoor tents. Laps were made around the edge of the spacious room inside the building.

“We have not changed anything except the location. I’m just excited to see this many people come out with the weather. We’re just going to make the best of it,” she continued. 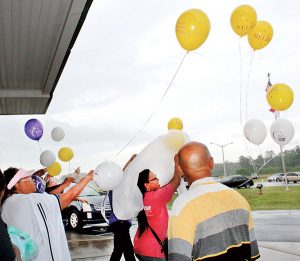 Gray skies and rain didn’t stop the balloon launch which kicked off the annual fundraiser honoring cancer survivors and lost loved ones. For more photos from the event, visit the Roanoke-Chowan News-Herald’s Facebook page.

The annual event is dedicated to raising money for cancer research. But people also come together to honor cancer survivors and caregivers as well as remember those who’ve already lost their battle against the devastating disease.

One of the key moments of the event every year is the Luminary Ceremony. The names of lost loved ones were placed on lighted luminaries and set up along the edge of the room. The lights were dimmed in order to let the luminaries and the memories they carry shine bright.

“This ceremony is an opportunity to remember all those we love,” said Tanesha Brown as she addressed the crowd inside. “Cancer shows no preference. It strikes children, adults, family, coworkers, and friends. Tonight let’s pay a tribute to those we love and all whose lives have been touched by cancer.”

This year’s speaker during the Luminary Ceremony was Wendell Perry, a 20-year survivor of prostate cancer. In 1997, he explained, he went to the urologist who began treating him for an infection. But after several months and no improvements, his wife urged him to get a second opinion.

Another doctor sent him to Duke in January 1998 where they finally discovered he had an aggressive form of prostate cancer.

“On February 23, which is my birthday, I was laying on the operation table. They did not wait,” he said of the urgency.

Perry continued detailing his fight with cancer after the surgery. They discovered months later the cancer had spread to his lymph nodes. He had to go through radiation treatment for six weeks, and he acknowledged with gratitude his eldest daughter who transported him to the hospital during that time.

“Six weeks, Monday through Friday, she drove me from Garysburg to Duke every day. Sometimes, I was laying in the backseat, don’t know where I was because I’m hurting,” he continued. “We fought this thing.”

Perry credited God for getting him through the cancer, giving him 20 extra years of life and counting. He also spoke lovingly of his family and other caregivers who supported him during his illness.

He urged the men in attendance to go to the doctor regularly.

“Black men are about 60 percent more likely to develop prostate cancer than any other ethnic group in America. The average age of diagnosis is around 66,” he said, citing several sobering statistics. “In 2017, there were 161,360 men diagnosed with prostate cancer. In 2017, 26,730 died from prostate cancer.”

“Get yourself checked early and God will bless you,” he concluded.

Throughout the event, people walked their laps around the room as a symbolic representation of the neverending fight against cancer. Several local entertainers provided performances for the Relay walkers to enjoy. Singers and musicians included Johnny Ruffin, Covenant, and Train Wrecked. Dance performances were by the Concrete Rose Dance Academy, the Young at Heart Praise Dancers, Step to Glory, and the Wellness Center Finest.

The theme for the 2018 event was “it’s game time, let’s beat cancer.” Participants were the “Most Valuable Players” and many groups decorated their tents or tables with sports-related themes. Groups offered food or activities throughout the event as a part of their fundraising.

“We wanted to have something for the kids,” explained balloon artist Cassandra Joyner.

Sandra Deloatch, a member of the First Baptist Severn team, added, “we raise money for cancer all year as our church group, and we just enjoy Relay for Life.”

Green-Cooper expressed her gratitude for everyone who donated and participated in the event.

“We’re here for the same purpose again this year: to celebrate more birthdays,” she said.

Every birthday for a cancer patient is precious. With the money raised during this year’s Relay event going to the American Cancer Society, they hope to be one step closer to finding a cure.