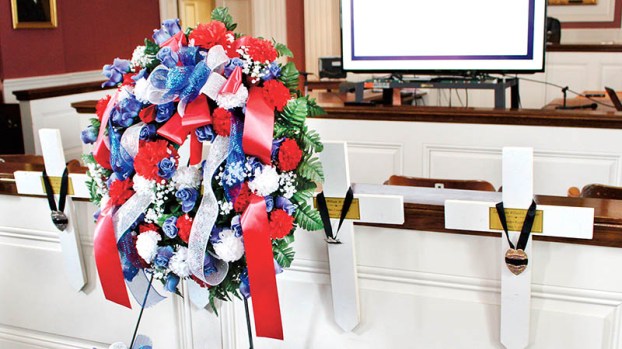 A colorful wreath sits somberly in front of a row of white crosses, each bearing the name of a fallen law enforcement officer who were memorialized on Friday during a service held inside the Northampton County Courthouse. | Staff Photos by Holly Taylor

They gathered to remember fifteen fallen officers who passed away in the line of duty between the years 1910 and 2000. Three of them served in Northampton County: Officer Lloyd O’Neil Mayse of the NC Wildlife Resource Commission, Trooper Raymond E. Worley of the NC Highway Patrol, and Chief Joseph E. White Jr. of the Rich Square Police Department.

“Law enforcement and correctional officers serve and protect our communities. These officers do so knowing they risk their lives every time they suit up and answer the call of duty,” Chief Hasty said as he addressed the officers and family members gathered inside the courthouse. 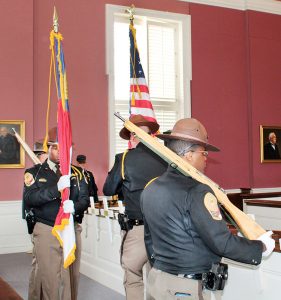 He continued on, speaking of the daily sacrifice law enforcement officers face and the oath they’ve all sworn to protect and serve those who are defenseless or voiceless. He cited statistics of officer deaths in the line of duty. There has been a total of 54 deaths in the United States so far this year, with two of those occurring in North Carolina.

“Thank you for your service and I salute you all,” Hasty concluded his remarks.

Officers representing different departments stepped up to the podium to recognize each fallen officer. They briefly shared information about each person, including how they died and what family was left behind. Many of the officers were slain performing routine parts of their job, such as serving a warrant or performing a traffic stop.

Wildlife Officer Lloyd O’Neil Mayse was shot and killed November 27, 1980 while conducting hunting license checks on two brothers in Northampton County. One of the brothers was a fugitive from Virginia. One brother died in the struggle, and the surviving brother was acquitted after accusing the deceased brother of firing the shot that killed Mayse.

Highway Patrol Trooper Raymond E. Worley was shot and killed May 14, 1985 after stopping a van on the highway. The driver of a second van stopped and shot Worley. The two vans were carrying stolen property. After fleeing the scene, the suspects were eventually arrested, and the shooter is serving life in prison after the death penalty was overturned. Worley had served 23 years with NC Highway Patrol.

Rich Square Police Chief Joseph White was shot and killed July 16, 2000 while investigating a possible drive off at a local gas station. He was shot after stopping a vehicle connected to the incident. The suspect is serving life in prison. White had been in law enforcement for over 30 years and left behind his wife, children, and grandchildren.

After each name was read, Jackson Police Chief John Young placed a badge on a small cross bearing the name of the fallen. At the conclusion of the ceremony, the Northampton Sheriff Office’s Honor Guard laid a wreath in front of the crosses and played “Taps” to honor their memory.

“To many, these are simply sad statistics, but to those of us who serve and to the affected family and friends, this is a profound, personal, and permanent loss,” said retired Col. W. P. (Wes) Terry, former Lodge #47 president, as he addressed the crowd. “I will not forget.”

Gina Goodwin understands just how profound that loss is. She is one of the family members who attended the Friday ceremony. Her mother was three months pregnant with her when her father, Halifax County Deputy Sheriff William M. Goodwin, was killed in the line of duty in 1969.

“I’m grateful and I’m glad to be his daughter,” Goodwin said, explaining that she had grown up hearing stories about the father she was never able to meet.

Northampton County Sheriff Jack Smith acknowledged the dangers of working in law enforcement and expressed his gratitude to all who serve.

“We want to thank the officers that have given the ultimate sacrifice. We just want to praise them and give them the respect, honor, and love they deserve. This [ceremony] shows that we will never forget them and we’ll always do this every year,” said Sheriff Smith.

“To their families, we wish that they continue to do well,” he continued. “Some of these officers I knew, such as Chief White and Trooper Worley. They’re very good people, very honorable people. And they didn’t deserve what happened to them.”

Chief Young worked with Lodge #47 President L.J. Burch along with other lodge members to organize the memorial ceremony which is held annually in Northampton County on the third Friday in May. They each thanked the courthouse staff and the clerk of court for use of the facility.

“Sometimes it brings back tough memories,” Young said. “Joe White, particularly. I served with him at DOC (Department of Corrections), served with him on the streets. I was coming off vacation that day when I got the call.”

While giving thanks to God, Young said he knows each quiet day brings him one step closer to a day when it won’t be.

“We need to take a day, at least a moment, to let people know. It helps us heal, helps us realize just how dangerous our job is,” he explained, noting that he hoped they would never have to add another name to the ceremony.

PLEASANT HILL – A high-speed pursuit of a 16-year-old driver near here Sunday shortly before midnight ended with an arrest.... read more