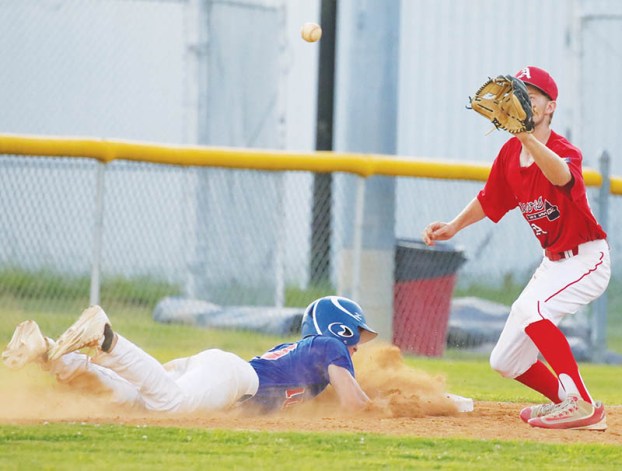 A runner dives back to third base on a pickoff attempt as Ahoskie (in red) and Perquimans opened the 2018 Junior American Legion baseball season Sunday with a non-conference doubleheader. The two teams split the twinbill with a win each. | William Anthony Photography

AHOSKIE – Local Post 102 and Perquimans split a doubleheader baseball series here Sunday afternoon with Ahoskie winning the first game 5-2 while Post 126 won the second contest 3-2.  Both were non-conference games and the season opener for both squads.

In game-one, Hunter Mitchell and Trent Hobbs combined to pitch a four-hitter and the Braves scored five runs in the third inning en route to the three-run victory for Post 102.

The Pirates got on the board first with a run in the top of the third inning for a 1-0 Perquimans lead.

Mitchell opened things for Ahoskie in the bottom of the inning with a single to centerfield, and Parker Bradley followed with a single to right. Bradley was pulled for pinch-runner Keyshawn Lassiter. Travis Williams then drew a walk to load the bases.

Perquimans got one run back in the top of the fourth to trim their deficit to 5-2 after four.

In the top of the fifth, Perquimans had the bases loaded with one out, but a double play ended the threat.

Ahoskie had six hits, two by Mitchell and one each by Bradley, Beverly, Futrell, and Hughson.

Perquimans opened the scoring in the second game with a pair of runs in the bottom of the first inning on two bases-loaded walks and had a 2-0 lead after one complete inning. The Pirates only had one hit for the entire game, but Ahoskie issued nine walks.

Post 102 scored a run in the top of the second when Chase Edwards singled to left field and Sam Doughtie followed with an infield base hit. Avery Harris then reached on a fielder’s choice as Edwards was forced at third.

Jonathan Ambrose reached first on an error to load the bases. Keyshawn Lassiter then grounded back to the pitcher, forcing Doughtie at home plate; but on a wild throw to first for an error on a double-play attempt, Harris was able to score. It was now 2-1, Perquimans, after an inning and a half.

Ahoskie tied the game in the top of the fifth when Bradley reached on a fielder’s choice. He then went to second on a wild pitch with two out. Harris followed with an RBI single to left, scoring Bradley.  Later, Post 102 loaded the bases on a Travis Williams walk, but a strikeout ended Ahoskie’s chance at more runs and the game was knotted, 2-2.

Perquimans then scored the winning run in the bottom of the fifth on a wild pitch for the walk-off win.

T.J. Lassiter, Logan Early, and Hughson pitched for Ahoskie, with Hughson getting the loss.

Ahoskie had six hits: one each by Zack Lassiter, Alden Lassiter, Hobbs, Edwards, Doughtie, and Harris.

Post 102 is now 1-1 to open the season and it will be these same two teams back at Hertford County High field Friday night at 7 p.m., this time to play a conference game.