WINDSOR – It still bears the battle scars of numerous tropical storms/hurricanes that submerged this tiny building facing King Street in the heart of downtown Windsor. 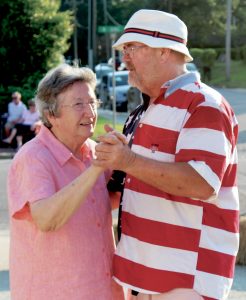 Russ Russell dances with his mom, Grace, on May 12 when the family hosted a large crowd in celebration of 80 years of Bunn’s Barbecue in downtown Windsor. Staff Photo by Cal Bryant

Just how popular is Bertie County’s oldest restaurant? Well, consider the fact that when the owners threw themselves a big birthday party this past Saturday, attended by over 300 guests, town officials closed off the street and joined in the celebration.

That family has owned and operated Bunn’s since 1969.

Russell said the music featured at the birthday bash, performed by the White Oak Band, entertained those in attendance and others not seen.

“The music filtered over to the Davis Ballpark….folks over there told me later they really enjoyed it,” he said. “I had some others tell me they just sat out on their porches and enjoyed the music.”

With all due respect to the band members, music wasn’t the main item on the agenda. Rather, it was Bunn’s world famous barbecue, succulent pork roasted to perfection and doused with the Russell family’s trademark sauce. The barbecue and the restaurant’s rustic setting – inside an old gas station, complete with an antique fuel pump outside – have been featured in state and national publications.

“We, our family, wanted to mingle with the crowd and enjoy this special day so we allowed members of the Bethel Assembly Christian Academy volleyball team to serve up our barbecue sandwiches and hot dogs,” said Russell. “They used it as a fundraiser to purchase new uniforms and they made enough to buy them.”

Additionally, the Russell family invited members of Victory Temple Church to set up and sell baked goods as a fundraiser.

“It’s all about giving back to the local community who have been so good and so loyal to my family over the years,” Russell stressed. “Plus it allowed me a chance to dance, to include one with my mom. She had a great time.”

The history of the building dates to the Civil War era. It was first used as the office of Windsor physician Dr. Henry Vaughan Dunstan. It later became a full service gas station operated by two families (Spruill and Phelps).

In 1938, B.B. “Bunn” Weathers and his wife, Helen, moved to Windsor and purchased the Texaco gas station and country store on North King Street from Jesse Waters, who sold the building as the Cashie River had flooded its banks and entered the building.

Mr. and Mrs. Weathers were the first to offer barbecue, cole slaw and the still famous baked cornbread.

Wilbur and Grace Russell took ownership in 1969 and kept the menu and tradition alive. However, one other “tradition” served as a reminder of life along the Cashie River as floodwaters from tropical storms and hurricanes shut the business down on several occasions. The worst floods came thanks to Hurricane Floyd in 1999 and then back-to-back storms in 2016: Tropical Storm Julia and Hurricane Matthew. 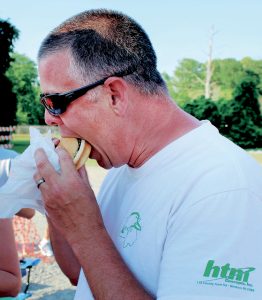 A guest at the birthday bash chows down on a world famous Bunn’s Barbecue sandwich…complete with cole slaw, of course. Staff Photo by Gene Motley

“We take a licking, but we keep on ticking,” said Russell. “Our town and our county have suffered a lot over the past few decades from floods, but we always seem to bounce back.”

And it’s perhaps the strong shoulders on the “senior” member of the family that the Russells stand.

“She has been and still is the backbone of the business,” said Russell.

“We’re already planning for our 90th birthday and if the good Lord is willing, we’ll all be right here waiting for you,” he concluded.

WINDSOR – You might say they’re graduating a year early. Bertie County Schools, which faced a deficit of $1.5 million... read more