KENLY – North Johnston blanked Bertie 15-0 here Saturday evening, marking 41 runs they scored while giving up none in their last two games – both against Northeastern Coastal Conference opponents: Hertford County and the Lady Falcons.

It was also the Panthers’ eighth shutout in their last 10 games and 11th of the year.

Meanwhile, a 10-run fourth inning sealed the Falcons’ fate in a game shortened to five innings. 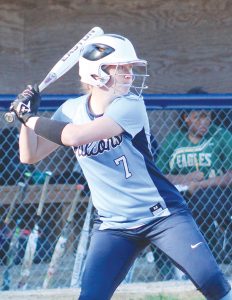 Bertie High’s Jessi Mizelle bats in an earlier game. Mizelle had a hit and reached twice in Saturday’s 2A softball playoff game, but North Johnston blanked the Lady Falcons 15-0. | Photo by Gene Motley

Jessi Mizelle opened the top of the first inning with a two-out single to left field, but she was erased one batter later on a fielder’s choice.

North Johnston – the second seeded 2A team in the field – answered with a pair of runs in the bottom of the first to take a 2-0 lead after the first full inning of softball.

In the top of the third inning Lindsey Dickens drew a two-out walk and stole second base, but a strikeout ended the Falcon threat.

The Panthers put up three more in their half of the third for a 5-0 lead after three complete.

In the top of the fourth, after Mizelle walked, Stephanie Castelloe hit a rope to left field with nobody out, but the North Johnston pitcher retired the next three Bertie batters in a row.

In the fourth, the Panthers sent 14 batters to the dish and 10 of them scored to ice their second-round game and send them on to the next round where they will face South Lenoir, which blanked Currituck 13-0.

Mizelle and Castelloe had the only hits for Bertie. Alyssa Byrum went the distance and took the loss after surrendering 11 hits including three home runs. The Falcons also committed five errors.

Bertie, who finished second in the NCC to the Knights ends their year with a mark of 11-10.