LASKER – Despite an early A.M. four-plus hour ride from Iredell County, the Statesville Christian Lions made it a happy return trip as they rode the strong pitching of Tyler Laws and hitting of Johnny Bayne and Jacob Smith to a 7-0 upset win over Northeast Academy here Saturday afternoon.

Laws only allowed one Eagles base-runner, and that was on an error on the pitcher as he struggled to get a ground ball out of his glove. He finished the day with 11 strikeouts making quick work of the home team, and surrendered just one hit, an infield smoker from Kevin Taylor.

“We just didn’t hit,” said Northeast coach Billy-Boy Bridgers. “Give those kids credit, their pitcher had a lot to do with it. Still, I’m proud of our boys, we had a good year.” 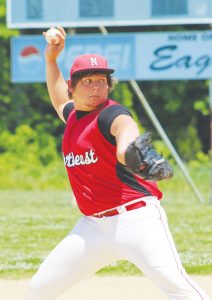 Kevin Taylor delivers in Saturday’s NC Independent Schools 1A state baseball playoff against Statesville Christian in Lasker. Taylotr used his bat to break up a no-hitter, but the Eagles couldn’t figure Lions pitching and fell to the visitors, 7-0. | Photo by Gene Motley

The game had an awkward beginning. Leadoff batter B.J. Lomax smashed a Taylor offering deep into the outfield. L.J. Barnes tracked it down, fired a bullet to shortstop Ryan Rowe, who relayed a strike to catcher Jarrett Jones. Meanwhile, Lomax, running well outside the third base path, body-slammed into Jones in an attempt to dislodge the ball. However, he was unsuccessful, called out on the play, and ejected for unsportsmanlike conduct because of the vicious hit. The umpires and coaches conferred for nearly 20 minutes before making their final decision.

Something about the play must have fired up Lomax’ teammates as five of the next six batters managed hits, two for extra bases. When the dust cleared, the Lions were ahead 4-0. They’d add to it with single runs in three of the next six innings.

Meanwhile, Laws was zoned in with his pitches. Working his fast ball and mixing his breaking pitches to keep the Eagle batters off guard. He was finally lifted in the fifth inning when he reached the 60-pitch count.

Northeast fared no better the next two and one-third innings against reliever Charlie Jacobs. He would lodge four strikeouts and the only hit was Taylor’s solid shot between first and second. He then induced a strikeout and a weak popup to first base to end the afternoon’s work.

“We played some tough teams to get here,” said assistant coach Brandon Laws. “But our kids stepped up, and we hit all up-and-down the lineup, despite what happened at the beginning of the game.

Lomax will miss the Lions’ next game as the team advances to face Wayne Country Day today (Tues.) in Goldsboro.

Northeast finishes their season at 14-5.